As long-standing residents of the East End, travelling anywhere remotely within West London tends to make Steak and I wince and grimace. Will we slip into a coma on the London Underground? Will we die of old age on the North Circular road? Will everyone we know fossilise by the time we return?

These are the questions that plague our mind whenever a trip to West London is called for, and it’s part of the reason why neither of us have visited a Persian restaurant in almost a year. Horrified at the realisation that we had inadvertently neglected one of the capital’s favourite comfort cuisines, Steak and I decided it was time to reacquaint ourselves with the Persian platter.

Our destination for the evening would be Mahdi restaurant – a popular and renowned establishment in the midst of Hammersmith. After spending a few minutes glancing through the usual selection of traditional Persian meats, I had decided that a “steady cholesterol level” was far too overrated, and promptly ordered a Chelo Chenjeh Makhsoos. This was composed of one grilled skewer of chenjeh (lamb fillet), one grilled skewer of koobideh (minced lamb), and a mountain of buttery rice. 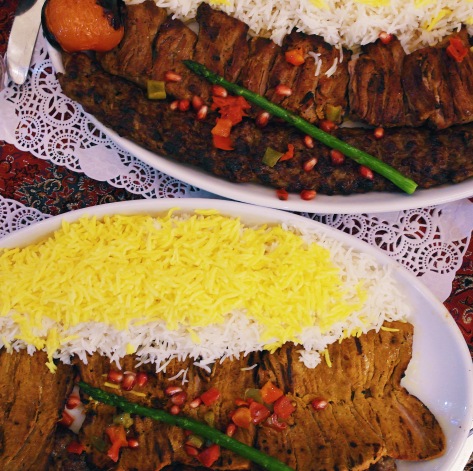 Immediately, the sensational koobideh won our affections, with a succulent, juicy, and fatty texture that instantly melted away. The thick and tender chenjeh meanwhile, proved to be equally enjoyable, with an incredibly rich and mature flavour. A word of warning does apply however, as those who are not a fan of strong “lamby” flavours may find the chenjeh to be a tad overbearing. 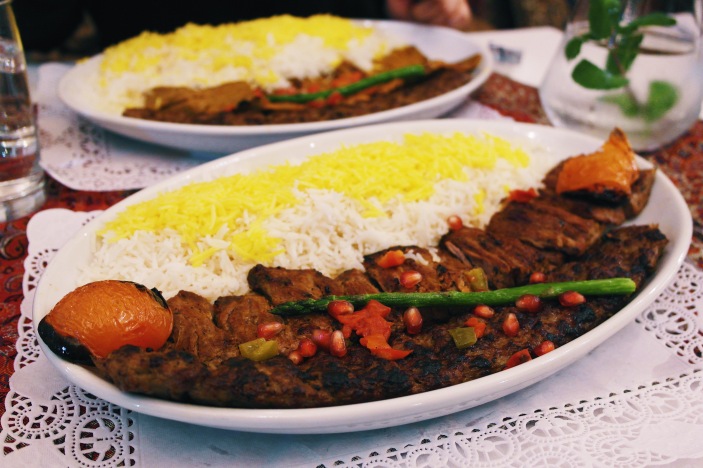 Steak meanwhile, had ordered a Chelo Barg Makhsoos, which included an identical skewer of succulent koobideh, and a skewer of barg – thinly sliced grilled lamb. Though the koobideh was just as delightful as my own, the barg proved to be saltier than Nusret’s finger tips, and its otherwise tender texture simply could not be enjoyed. Indeed, as we glanced over at the table next to us, we noticed that our neighbouring patrons seemed to have encountered the same problem, and both our skewers of inedible barg remained relatively untouched. 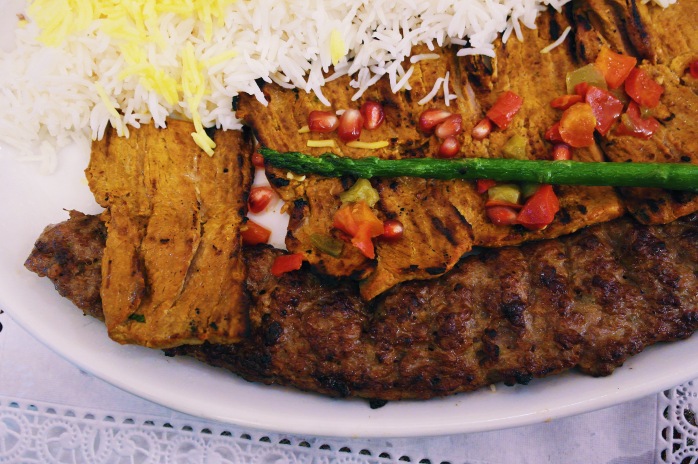 Altogether, our bill amounted to approximately £40 for two, and you too can expect to pay anywhere between £15 to £25 a head, given that starters range from £5 to £7, and main dishes range from £10 to £20. For the (mostly) satisfying nature of the food, and the clinically insane volumes of meat and rice, a meal at Mahdi should certainly feel like an affordable affair.

Whilst at other Persian restaurants, we have often encountered an “eat and get out” attitude from an aloof team of waiters and waitresses, our experience at Mahdi was quite the opposite. As soon as we stepped in, staff members welcomed us with warmth and sincerity, and this continued for the duration of our stay.

For many Persian restaurants, styling and decor seem to take almost as much precedence as meat and rice. Some, like Alounak, take an approach of simplicity, whilst others, like Behesht, are as “blinged up” as the broom cupboard of a Saudi Sheikh. Mahdi very much sits in the middle, with a decor that is attractive and detailed, but ultimately, restrained and sensible. The restaurant can be found a five minute walk away from Ravenscourt Park station, and a ten minute walk away from Hammersmith station. Limited pay and display parking can also be found on adjacent roads, and most restrictions end at 5:30pm.

After being away from Persian restaurants for such a significant amount of time, Mahdi has served to remind us of everything that we have been missing out on. Indeed, a plate of Persian food is by far, the most comforting and wholesome heart attack that one could ever hope to have, and the offerings at Mahdi really are rather good. Much like other Persian restaurants, there is some room for improvement, but for a simple and deadly meal of rice, meat, and fat, Mahdi would be a good a place as any in which to take your last breath.