That tends to be my usual response whenever I discover that a friend or a colleague at dental school hails from Harrow. Not because I look down on Harrow in any way, but because I genuinely feel sympathy for anyone who travels from so far and for so long, just to get to the Royal London hospital every morning. Subjecting oneself to such an arduous journey, simply for something as trivial as a professional degree with promising prospects, just doesn’t seem worth it in my eyes. Travelling that very same distance for a meal on the other hand, is completely justifiable.

Renowned for exquisite comfort-food and a rather flamboyant decor, Behesht is just one of the many Persian giants residing within London, and has always been the first name to come to mind when one thinks of “food” and “Harrow”. After picking up my “Zone 5 and beyond” travel kit, (which consists of an emergency radio, a flare gun, and my passport), Steak and I set out to make the harrowing journey that so many of my colleagues endure every day.

The first thing to note about Behesht, is that they “do not serve tap water on the premises”, and so, you will be forced to choose between either bottled water, or a selection of unexciting soft drinks and juices. (One would think that they would at least offer some creative beverages to make up for it). Of course, as a dental student, I am unable to drink coca cola, as my head would explode and my body would spontaneously combust. Thus, I ordered some carrot juice, which carried a strong flavour, a mellow tone, and, overall, was quite refreshing.

For our main course, Steak and I decided to share the “special kebab” platter – something of an unwise decision on my part, given that Steak’s childlike-appetite would mean that I’d practically be eating the entire thing by myself – (which is exactly what happened). The platter consisted of an assortment of good to high quality meat, accompanied by grilled tomatoes, salad, and a helping of soft,  buttery rice. The portions were generous to say the least, and almost every piece of meat was cooked to an idyllic level. The lamb-mince kofte in particular was exceptionally soft and succulent, and delivered strong flavours from the onions and spices infused within. Equally impressive was the lamb fillet, which, despite being cooked to medium-well, remained surprisingly tender. The pure, inherent flavour of the lamb had been well retained, and consequently, each bite delivered a subtle, background tang with a moderately deep body of flavour. In combination with a plentiful amount of seasoning, it was this inherent flavour of the fillet that rendered it to be my favourite cut of the lot.

The chicken wings meanwhile, were firm but tender, and they too were brimming with flavour, owing to a good amount of seasoning and a plentiful coating of marinade. As for the chicken breast – some pieces were inevitably dry, whilst others managed to retain their moisture. In comparison, the boneless chicken proved to be far superior, and delivered a mild hint of lemon alongside a well-seasoned coat. Relative to the other items, the subtle flavours of both the breast and the boneless chicken didn’t provide much excitement to the palate, but their humble contribution to the platter was appreciated nonetheless. 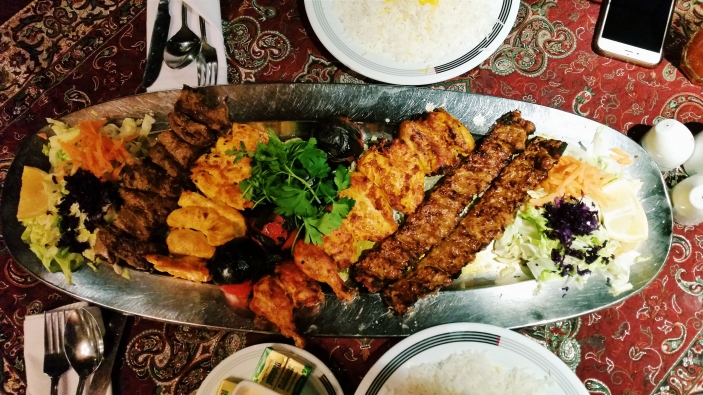 The special kebab platter cost a reasonable £29, whilst the carrot juice cost £2.50, and after a 10% service charge, this amounted to a total bill of £34.70 for two. Generally, starters range from £3 to £5, and other main courses range from £6-£12. Relative to the quality of the food, the hearty portions, and the location, Behesht seem to demand a very reasonable sum for their culinary services. Whether you order a big platter, or a more sensible individual meal, it’s unlikely that you’ll break your bank, but almost certain that you’ll break your belt.

However, as pleasing as the food and the bill may be, the aloof and relatively inattentive service may somewhat let you down. What’s more, whilst restaurants in Britain are not “legally-obliged” to provide tap water, I do consider it to be poor practice, and a poor display of manners to not do so. It’s a discourteous policy that many restaurants in the UK are guilty of upholding, and in my opinion, it’s nothing more than a shameful attempt to squeeze extra money out of paying customers.

Whilst the waiting staff at Behesht can, at times, be guilty of not paying enough attention, it’s clear that whoever designed the decor, paid a little bit too much. To paint a picture of Behesht’s interior into your mind, one must ask you to cast your mind to a dark and majestic cavern, beneath the footholds of a grand mountain in mid-century Persia, furnished to the tastes of a highly-eccentric Persian nobleman. Traditional tables, chairs, cloths and cushions fill the entirety of the space, whilst fountains and parrots sit in close proximity to the dining area.

The decor is certainly elaborate, if not a little bit mad and completely over the top. Whilst excessive decoration is by no means a bad thing, the styling and set-up could certainly have been toned down a little, and the restaurant would have remained just as attractive. Respect must be given however, for the amount of effort and capital that the management have invested.

Behesht is otherwise a rather large restaurant with four equally extravagant dining areas at hand, making it well-suited for group-outings and special occasions. The restaurant can be found 10 – 15 minutes away from Kensal Green station, and parking may be available on nearby residential roads.

Putting the confusing acoustics and the small risk of dehydration aside, Behesht offers a considerably enjoyable dining experience. In keeping with the hallmarks of a successful, traditional Persian restaurant, they offer an uncomplicated, no-nonsense menu, and execute it with a level of excellence that thoroughly satisfies the palate. Throw in a unique setting that is probably too exuberant for its own good, and it’s easy to see how Behesht have earned the distinguished reputation that continues to precede them.

Halal status: All the meat served here is halal.