Ask a group of people what they regard to be the best Persian restaurant in London, and you’ll receive a range of responses. “Behesht!” proclaims one person. “Tandis!” cries another. “Alounak!” declares the third. In the current climate, it’s certainly a discussion to avoid in public, given that such loud outbursts of Persian words in quick succession would be enough to make any ignorant passer-by sweat with suspicion. With branches in Kensington and Bayswater, Alounak is one of the most popular names in Persian cuisine. Positive testimonials – both written and verbal – shoot out from every corner of the grapevine, and as a result, Alounak has comfortably resided on the higher end of my “To-Eat” list for quite some time. Having finally paid them a visit earlier this year, I can happily say that it was well worth the wait.

Alounak employs a simple, no-nonsense menu which spans no more than two sides of A4, and naturally, I opted for the meatiest one-man dish I could find – the “Alounak special”. This was comprised of a lamb kebab and a mixed skewer of lamb and chicken fillet. Steak meanwhile, opted for a “Chelo Kabab Koobideh”, which consisted of two skewers of lamb kebab, and as expected, both dishes arrived with a mountain of soft, buttery rice. If you’re keeping an eye on your cholesterol levels, you should probably keep your eye away from this review.

The lamb kebab which was common to both our dishes was the first to be devoured. As expected, it was incredibly soft and moist, and had absorbed the flavour and juices of the onions within them. The chicken meanwhile, was thick, and well-seasoned, and although dry in some parts, it carried a strong flavour, which prevented this lack of moisture from ruining its contribution. The skewer of lamb fillet followed its chicken companion into the dry deserts of Persia, having been cooked to medium-well. However, despite this dry quality, the lamb fillet was surprisingly pleasant, and was actually my favourite meat of the selection. The fillet carried a strong inherent flavour and a subtle meaty tang, which had remained intact throughout the cooking process, and combined well with the dosage of seasoning. Although it was a mildly greasy affair, every piece of meat on our plate was of a good quality, and in combination with the rice and the palate-cleansing grilled tomatoes, it was a positively hearty and comforting meal. 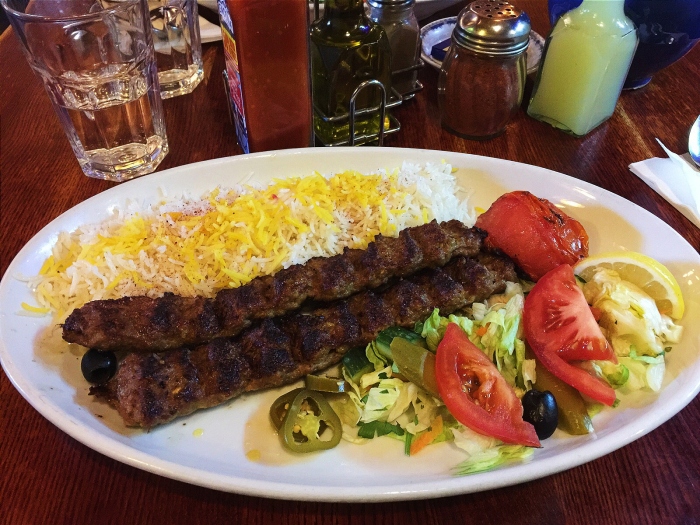 The Alounak special amounted to £13.80, whilst Steak’s lamb kebab cost £8. This amounted to a total bill of £23.90, including service charge. Generally, starters range from £4-£5, mains from £8-£14, (or £42 for a large mixed grill), and drinks and desserts cost between £1.50-£4. In return for quality food that arrives in generous portions to generously help you slip into a coma, Alounak ask for an incredibly fair price. The food is both filling and satisfying, and it’s unlikely that you’ll feel out of pocket at the end.

As warm and as comforting as the food is, the service at Alounak is a little detached and indifferent. Staff members are also fairly inattentive, despite the relatively small area they have to patrol. Putting my attention-seeking problems aside, service is otherwise fairly prompt.

The Bayswater branch of Alounak is fairly small and cosy. Bare brick walls and a basket-weave ceiling surround the wooden-floored dining area, which is dominated by fabric chairs, Persian-style sofas laden with embroidered cushions, and decorative paintings and ornaments. All these elements come together to create a subtle touch of authenticity, which remains reserved and sensible. In keeping with this cultural theme, a traditional oven sits by the door, providing a convenient location for both the production of fresh bread, and the disposal of any irritating friends you wish to rid yourself of on your way out. A small fish tank also resides within the restaurant, providing a place of residence for what may just be one of the world’s ugliest fish – a fish so ugly, that Steak almost mistook its face for a botox-enhanced replica of my own. This visually-challenged fellow continued to stare us down during our meal, probably in the hope that we’d run away and leave our food behind – a tactic I often utilise myself. Unsightly fish and the occasional grotesque food-blogger aside, Alounak’s Bayswater branch does well to provide its customers with attractive surroundings within the little space that is available.

The restaurant is a quick 10-15 minute walk from either Bayswater or Royal Oaks station, and although parking is available on nearby roads, free spaces may be difficult to come by.

What Alounak lacks in the quality of its service, and the geniality of its ambience, it more than makes up for with the calibre of its food. When it comes to middle-eastern cuisines, “simple, yet exquisite” is often a winning formula, and it is a formula that Alounak’s chefs have successfully adopted into the nature of their cooking. Whether or not Alounak is worthy of the top spot amongst London’s Persian eateries – I cannot say for sure, given that I have yet to visit many of its rival contenders. What I can say however, is that they certainly reside firmly within the cream.

Halal status: All the meat here is halal.

Locking down our lunch order with @crustpizzauk: 1) Vietnamese Chilli Chicken 👉🏽 2) 1889 Margherita 👉🏽 3) Garlic & Herb squares. 🍕🍕🍕 . A trio of cheesy goodness delivered straight to our door from @crustpizzauk 's Ilford branch. Check out their hearty and wholesome pizzas, and try not to fly-kick your family members for the first slice 🙌🏽 . Halal status: All meats / items are halal. . Disclaimer: We received a complimentary "Family Feast" deal to sample. . #foodblogger #halalblogger #pizza #dinner #comfortfood #steakandteeth #SAT
Staying indoors and drooling back to the epic Canadian breakfast from @forksandgreen. Fluffy pancakes, merguez sausage, halal bacon, scrambled eggs, and a bucket-load of pure Canadian maple syrup. Order from @deliveroo or @ubereats_uk if you live nearby, or put this on your list of "things to eat if we make it out of this alive". 🥞🍳 . Food: 4/5 Value For Money: 4/5 Service: 4.5/5 Decor / Ambience: 4/5 Overall: 4/5 . Halal status: Halal meats available on request. Alcohol and pork are served on the premises. . #halalblogger #foodblogger #breakfast #brunch #pancakes #steakandteeth #SAT
Mondays at work are always naan-staap! Luckily you can always stuff your sorrows away with a hearty stuffed naan from @naanstaap. . Pictured above are the moreish lamb keema naan and chicken achari naan, the soft and meaty shaami kebabs, and the lightly dusted masala chips. After rounding things off with a comforting karak chai, S and I left rounder than the naans themselves. If you're stuck on Green Street and need a break from the bartering and brawling, be sure to check them out for a quick bite. 🥞 (Pancake emoji because there isn't a naan emoji - what's up with that?!) . Food: 3.5/5 Value For Money: 4/5 Service: N/A (#invite) Decor / Ambience: 4/5 Overall: 3.5/5 . Disclaimer: We were invited to sample the menu at @naanstaap . #foodblogger #halalblogger #invite #naan #streetfood #lunch #dinner #steakandteeth #SAT
The dulche de leche cheesecake of your wildest dreams. A paella pan the size of your torso. Two pretty good reasons to visit @gustosevilla. . Located just around the corner from Seville Cathedral and La Giralda, @gustosevilla are known for their hearty paella pans for two, and have both seafood and vegetarian options available to satisfy your cravings. . Halal status: Seafood and vegetarian options available only. Alcohol is served on the premises. . Food: 4/5 Value For Money: 3.5/5 Service: 3.5/5 Decor/Ambience: 3.5/5 Overall: 3.5/5 . #foodblogger #halalblogger #travel #seville #spain #spanish #paella #dinner #steakandteethtravels #SteakAndTeeth #SAT.
Heavenly pistachio-crusted lamb chops, served with a sweet and creamy shallot pomme puree, and a sharp, vibrant pomegranate molasses. Fine contemporary Turkish cuisine from @mantlknightsbridge, sister restaurant to the equally-renowned @skewdkitchen. . Food: 4/5 Value For Money: 3.5/5 Service: 4.5/5 Decor / Ambience: 4/5 Overall: 4/5 . #halalblogger #foodblogger #themantl #mantl #dinner #turkish #steakandteeth #SAT
Five years ago, I would've scoffed at anyone who suggested visiting a fast-food restaurant like Mcdonald's, and probably have thrown my shoe. My better half S however, is a little more down to earth, and over time, has eroded a little bit - (just a little bit) of my self-righteous snobbery. The result? I can now appreciate the simpler things in life, like a cracking good triple cheeseburger from @bims_uk, washed down with a healthy helping of tiramisu. Check out their new Ilford branch, but be ready for those crowded queues! 🍔🍟 . Food: 3.5/5 Value For Money: 4/5 Service: N/A Decor / Ambience: N/A Overall: 3.5/5 . Disclaimer: We were invited to a pre-launch of @bims_uk 's Ilford branch. . #invite #foodblogger #halalblogger #burger #burgers #bims #bimsuk #fastfood #steakandteeth #SAT
Mention the words "peri peri chicken" and you'd be forgiven for saying "Here we go again", or hearing DJ Khaled's voice in your head - "Another one". Truth is, when @chicos_london invited us to their shiny new restaurant a few weeks ago, we had similar thoughts in the back of our head. . Much to our surprise however, we discovered a varied menu with mouthfuls of flavour. From the juicy lemon chilli wings and seriously messy loaded fries, right through to the tender chicken breast in creamy mushroom sauce ("Chef's Special"), there was no shortage of great dishes that will certainly have us returning for more. 🍗🐔 . Food: 4/5 Value For Money: 4/5 Service: N/A (#Invite) Decor/Ambience: 4/5 Overall: 4/5 . Disclaimer: We were invited to @chicos_london to sample the launch menu. . #invite #foodblogger #halalblogger #chicos #dinner #periperi #steakandteeth #SAT
SEVILLA! Very rarely do we visit a restaurant more than once whilst on holiday. In the case of @la_bartola_bar in Seville however, we made an exception. Partly because they were located directly opposite our hotel, but mainly because of their exceptionally diverse tapas menu. Creative, colourful dishes, fantastic flavour combinations, and minimal prices. Be sure to ask about the croquettes of the day, AND check what they have the daily specials board! Pictured: 1) Chocolate Panna Cotta 2) Salmon Tataki 3) Fried Cod 4) Red Pepper Croquettes 5) Red Thai rice 6) Fried Calamari Food: 4.5/5 Value For Money: 5/5 (Approx €20-€30 euros for two) Service: 5/5 Decor / Ambience: 4/5 Overall: 4.5/5 Halal / dietary status: Plenty of vegetarian, vegan and pescatarian options available. Alcohol is served on the premises. #foodblogger #halalblogger #tapas #spain #spanish #seville #travel #traveleats #SteakAndTeeth #SAT