“Everything the light touches is East London”. “What about that shadowy place?” “That’s Green Street. You must NEVER go there”. As a child, these were the words of caution that my father imparted upon me. In the years that followed, much of my youth was spent trying to avoid the bloodshed that comes with shopping on this infamous stretch road, and some nights, I would often have horrific nightmares of needing to buy new Eid clothes. This soon changed when Brioche Burger arrived on the scene, but after maturing into one of London’s best halal burger establishments, they too decided to escape the chaos, and promptly moved to Walthamstow. Suddenly, it seemed that Green Street would once again be plunged into the darkness of kebab vendors and saree warlords.

But, from the ashes of Brioche Burger‘s former site, there arose a number of ambitious new burger establishments – the majority of which I largely ignored. After all, what could possibly come close to the significant void that Brioche Burger had left behind? The answer it seems, may just be “Fatboyz Diner”, an establishment which, by its very name, conjures up connotations of a typical East End burger establishment – big in aspiration, but lacking in execution. I would soon find out however, that unlike many other rookies, Fatboyz had a couple of tricks up their sleeves.

With a straightforward selection of simple burger formulations and fairly familiar sides, the menu presents itself as a halfway house between gourmet and fast food. Sticking with the Fatboyz’ principle of “simplicity is key”, we ordered a doubled-up version of the highly-regarded “American”, and requested a medium-rare cook.

To my delight, two succulent medium-rare patties is exactly what arrived, and instantly, the fat-infused juices began to ooze and flow from within. Forged from (non-aged) chuck, the beef retained a reasonable depth of flavour, which meshed together with the simple combination of American cheese, caramelised onions, ketchup, mayonnaise and mustard. This resulted in a range of sweet elements, which complemented and enhanced the beef. Together with the delightfully fluffy and airy brioche buns, the humble American did what Americans do best, and shot a hole in my face as I gawked with disbelief. How could a non-aged burger in a local “diner” be quite this good? 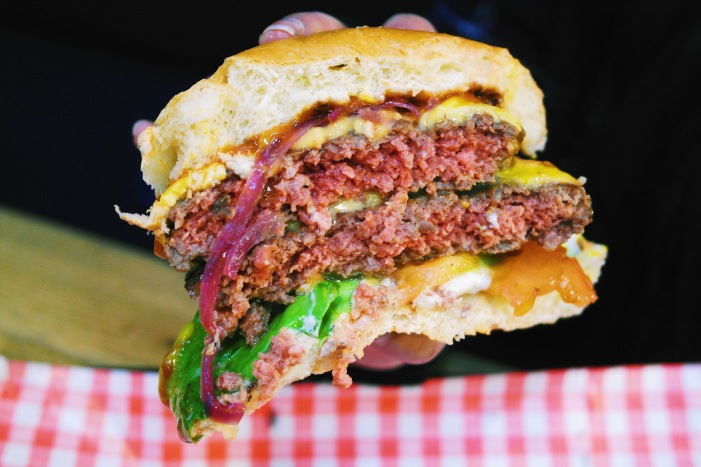 We also tried our hand at the “The Champ”, which consisted of an 8oz beef patty, an onion ring, smoked cheese, and a combination of “bacon mayo” and “special sauce”. Here, the succulent patty was accompanied by the smokey tinge of the smoked cheese, which elevated and added dimension to the beef, without choking it out altogether. Together with the subtle tang of the “bacon mayo” and “special sauce” combination, The Champ was satisfying in its own right, but not quite as impressive as the simple American. (An amusing outcome, given its name). 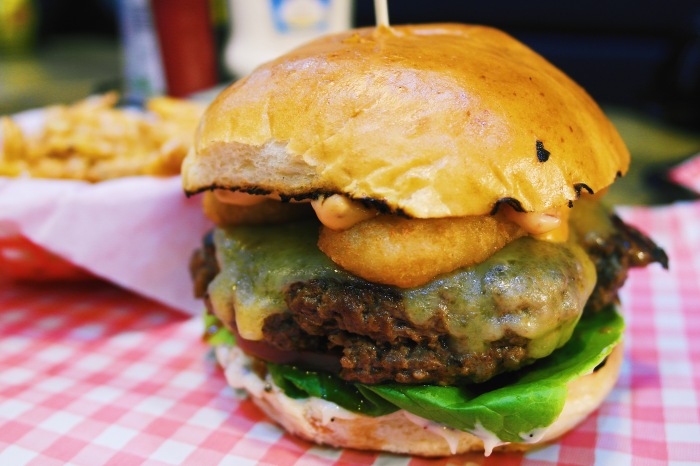 The chilli garlic fries however, were equally delightful, owing principally to a soft yet crisp texture, which managed to hold its form, despite being smothered in a sharp, savoury, and incredibly moreish chilli garlic sauce.

If the calibre of the burgers wasn’t surprising enough, the prices certainly were, with burgers ranging from £6 to £11, and sides and drinks from £2 to £4. Our own bill amounted to approximately £19 for two, which was a fairly inexpensive burger outing by current standards.

Service was also speedy and remarkably attentive. Throughout our stay, our friendly waitress periodically came by to ensure that all was well, and it was certainly somewhat unexpected for a counter-serve diner. (Even more so for an eatery on Barking road, where good service generally equates to not being punched in the face at the end of your meal).

Whilst simplicity forms the basis of the menu, it seems that outlandishness forms the basis of the decor, which is made up primarily of loud red and black tiles, classic film posters, and a giant graffiti mural. There’s certainly nothing subtle about it, and although there isn’t a huge amount of seating, it’s a clean and crisp space that is suitable for a casual meal with friends. Fatboyz Diner can be found a ten minute walk away from Upton Park station, and parking restrictions apply on adjacent roads until 6:30pm (Monday to Saturday).

Whilst many new burger establishments have tried to distinguish themselves with novel formulations and wacky accompaniments, Fatboyz Diner have done the exact opposite, and rooted themselves in the very basics of burgerology. Granted, the absence of aged meat may be a downer for some, and there isn’t a great sense of excitement when one reads through the menu, but by flawlessly executing a good, honest, no-nonsense cheeseburger, Fatboyz Diner have proven that when it comes down to it, you don’t really need much more.

Halal status: All the meat served here is certified halal.