Whenever my birthday comes around – (well, once a year really?), I find it both endearing and confusing when Steak and my family are more excited about it than I am. From my perspective, the day of my birth should be a day of national mourning rather than one of celebration, but if it gets me a slice of cake and forces people to be nice to me, well, then I’m pretty happy to have it. Alas, this year’s birthday was also the first birthday of my working life, and so, after a busy day of telling people to watch how much sugar they eat, there was very little time for me to stuff my own face with it.

Undeterred, Steak and I headed out for a light spot of dinner at the the highly-popular Lokhandwala – a novel Indian tapas restaurant in the backstreets of Fitzrovia. Themed around the tragic love affair between “Vijay” – a “suave Indian crime lord” and Charlotte – an “elegant British aristocrat”, Lokhandwala transports its patrons to a high society setting in colonial India, and in that regard, serves as the perfect venue for the birthday of a man who feels about 150 years old.

Halal status: All the meats served here are halal. Alcohol is served on the premises.

Over the course of the year, London has seen many contemporary tapas-style Indian eateries open their doors – (Hankies, Talli Joe and Chai Naasto to name a few), but Lokhandwala is unique in the sense that its menu is more “Indian-inspired” than it is an authentic Indian fare. It features a mixture of European-Indian fusion dishes and a handful of traditional favourites, and upon first glance, one might consider it to be something of a subversion of true Indian cuisine.

First to arrive were the “celery prawns”, which – to my surprise, were cooked to perfection. The extremely tender prawns pulled apart with ease, and their deep, smokey flavour was enhanced by the wonderfully bright and sharp flavour of the celery-based sauce.

The sensational seafood did not end there, as the trio of pan-seared scallops proved to be particularly delightful. Each one simply fell apart in the mouth, and the sweetness of the sharp chilli sauce worked incredibly well. They were however, served upon betel leaves, and as a carnivorous dentist, I couldn’t tell whether they were there as a form of decoration, salad, or a test of my paan-cessation skills. 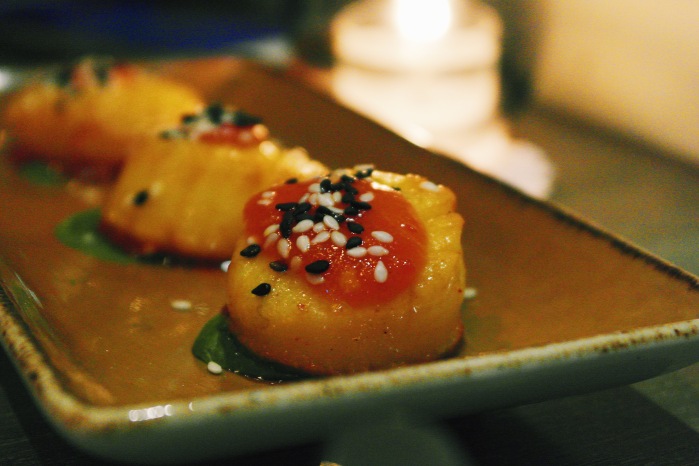 Next, we tried the lamb chops – the benchmark of any good Indian restaurant. To my delight, each chop was as thick as my skull, and after sinking my teeth into one, I discovered a perfect medium cook with a subtle tinge of pink. By far, it was one of the most succulent lamb chops I had eaten in a long while, and as each bite melted away in my mouth, it released a delicious, creamy flavour that coated the palate. 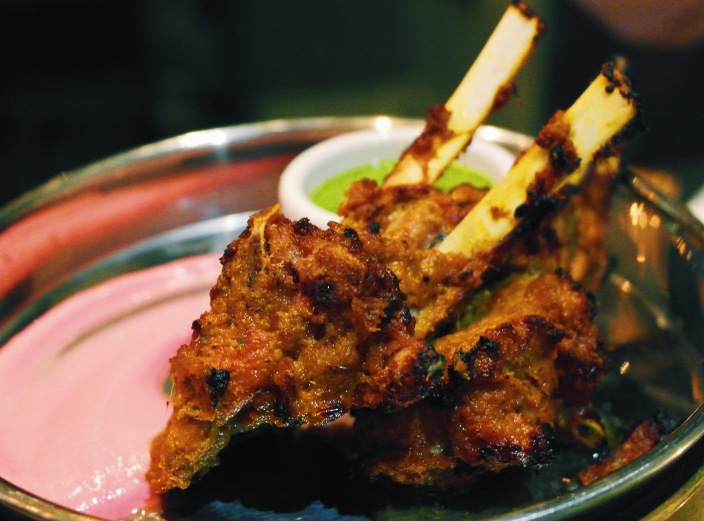 Soon, it became apparent that lamb is Lokhandwala’s forte, as their tiny lamb sliders followed up on the success of their chunky chop siblings. The soft and succulent shami kebabs were incredibly juicy and fatty, and held a rich, lamby flavour that meshed together with the gooey grilled brie. Together with the soft and fluffy buns, they were everything that a lamb slider should be.

The “modern classic tikka” on the other hand, ended up being the only disappointment of the night. Whilst the combination of murgh malai tikka and Montgomery cheddar worked well within the quesadilla, the standalone tikka cubes were incredibly dry and underwhelming. Granted they were cut from chicken breast, but the lack of flavour and texture gave them very little presence in comparison to the other items.

Reasonably satisfied, we ordered the “Kheer brûlée” for dessert, at which point, Steak made a suspiciously short trip to the bathroom. Her scheming was soon revealed, when the waitress returned with a kheer brûlée and a single candle – presumably to symbolise the remaining lifespan of my hair.

Taking care not to blow out my teeth as well the candle, we cracked through the layer of crystallised caramel, which could have been a tad thicker. To our delight however, the thick and creamy kheer below carried subtle hints of saffron and pistachio, and contrasted phenomenally with the nuttiness of the crunchy toasted sesame sticks. Truth be told, Mother Dearest would probably have made it my last birthday if she knew I paid £8 for a single bowl of kheer, but dare I say it – it was worth every penny.

Across the menu, small plates, sides, and desserts cost around £4 to £8, whilst larger plates range from £11 to £22. As a result, it’s certainly possible to rack up a sizeable bill, and given that Lokhandwala is a tapas-style restaurant, you should expect fairly small portions. However, from our perspective, the creativity of the menu and the execution of (most of) the dishes is worthy of the price tag, and given that our own meal amounted to a reasonable £55, we’d say that Lokhandwala offers a fairly affordable dining experience.

You should also find that staff members are courteous and welcoming, and that service is relatively efficient. Occasionally however, some waiting staff head into the bar area towards the back of the restaurant, and if you end up dining in the corner of the restaurant like we did, it can take a bit of time to gain their attention.

Away from the food, Lokhandwala also manages to shine in the field of interior styling. The intricate decor exudes a sense of rustic Victorian aristocracy, and does indeed seem reflective of the high society settings that may have once existed in Colonial India – no doubt, at the expense of the working people. Whilst this exploitation is certainly not something to celebrate, the surroundings do well to add a touch of history to the experience. Lokhandwala can be found a short walk away from Goodge Street station, or a slightly lengthier walk away from Tottenham Court Road. Paid parking is available on the streets nearby, but public transport is advised.

With its creative fusion menu, Lokhandwala has enough traditional items to ensure that your ancestors don’t roll over in their graves, and plenty of novel items to ensure that they are not marked down as “just another Indian restaurant”. By no means is it a conventional or traditional Indian eatery, but, if like me, you’re getting a bit bored of convention, then it’s exactly the kind of “different” that you may need.