The problem with going out for breakfast or brunch is – quite literally, that it’s breakfast or brunch. After 7-8 hours of compulsory starvation – (my personal definition of “sleep”), the last thing any of us want to do is spend another hour travelling for our very first meal. And yet, many of us still do, simply because it’s a far better option than the prospect of cooking brunch at home, and – (if you’re as “creative” as I am), having to call the bomb squad in to clean up the mess.

Despite the kitchen carnage, I still think that brunch is always more satisfying when you’ve made it with your own blood, sweat and maple syrup, but for those sudden moments of laziness,  London is more than well-equipped. In every corner of the map, there is a suitably enticing brunch destination, and down by the southern banks, “Where The Pancakes Are” takes up the mantle. Eager to see the substance behind their aesthetics, Steak and I headed over to pilfer their precious pancakes.

Halal status: None of the meat here is halal, but non-meat / vegetarian / vegan options are available.

As you can imagine, the menu is simple, but broad, with a variety of sweet and savoury pancakes to suit every conceivable palate. Being the sugar-fiends that we were, we ordered a plate of “Forest Berries” – composed of two buttermilk pancakes, berry compote, greek cream, crushed meringue and toasted almond flakes. Though the pancakes were wonderfully soft, they were somewhat stodgy within, and lacked the fluffy, buttery texture that to me, is the defining characteristic of a seriously good pancake. The accompanying components however, intermingled seamlessly, with a mixture of fruity sweetness and tartness, and a pleasant, aromatic nuttiness. As far as pancake formulations go, this was a pretty safe and classical combination.

The same could not be said however, of the “Hummingbird”. As well as suffering from the same dense stodginess, the pancakes were accompanied by an assortment of cinnamon-poached pineapple, greek cream , lime syrup, pomegranate seeds, and toasted coconut – (or at least, a rather small pinch of it). For us, the combination of sharp pineapple, sharp lime syrup, and fairly sharp pomegranate seeds was fairly repetitive on the palate, and the lack of a sufficient amount of toasted coconut – (or some other contrasting ingredient), meant that there was no opportunity for our tastebuds to have a break. As a result, we did not think that this particular pancake formulation worked particularly well. 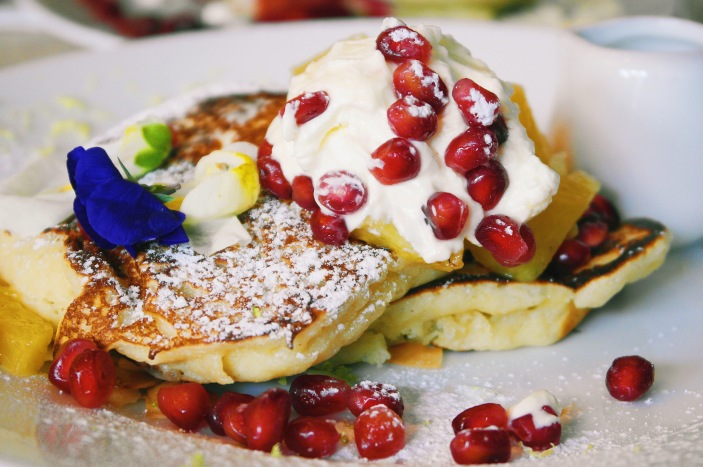 Across the menu, pancakes range between £9 to £12, drinks cost between £2 to £5, and extra items come in at £1.50 to £3 – (including maple syrup, which is not included with any of the pancakes). Whilst these prices are in line with expectations, we do feel that both the volume and calibre of the breakfast dishes fall short of satisfaction. Indeed, by the time I scoffed up my pancakes, I began to wonder whether “Where The Pancakes Are” was in fact, supposed to be written as “Where Are The Pancakes?”. As such, if you’re not already from the southern banks of London, it may not be worth making the trip – particularly in a city that has no end to its variety of breakfast destinations.

Service on the other hand is warm and attentive, and whether you’re waiting in the queue outside or dining comfortably inside, staff members will ensure that you are not forgotten about.

Credit must also be given to the styling within, which is comprised of an airy combination of pinewood, greenery, and tall, elegant light fixtures. If, like many young individuals, you thrive and feed on aesthetics more than you do on pancakes, the attractive decor you’ll find here may just be all you need. Where The Pancakes Are can be found a five to ten minute walk away from Borough or London Bridge stations, and limited parking options are available nearby.

In the era of Instagram, it can often be difficult to separate aesthetics from substance, and in the case of Where The Pancakes Are, we’d say that the balance lies heavily towards the former. Perhaps, as a result of being big brunch buffs at home, Steak and I are simply a lot more critical, but by the end of our rather small brunch, our overwhelming feeling was one of disappointment. From our perspective, Where The Pancakes Are isn’t the only place where the pancakes are, and – truth be told, you can certainly find far better places elsewhere.

Locking down our lunch order with @crustpizzauk: 1) Vietnamese Chilli Chicken 👉🏽 2) 1889 Margherita 👉🏽 3) Garlic & Herb squares. 🍕🍕🍕 . A trio of cheesy goodness delivered straight to our door from @crustpizzauk 's Ilford branch. Check out their hearty and wholesome pizzas, and try not to fly-kick your family members for the first slice 🙌🏽 . Halal status: All meats / items are halal. . Disclaimer: We received a complimentary "Family Feast" deal to sample. . #foodblogger #halalblogger #pizza #dinner #comfortfood #steakandteeth #SAT
Staying indoors and drooling back to the epic Canadian breakfast from @forksandgreen. Fluffy pancakes, merguez sausage, halal bacon, scrambled eggs, and a bucket-load of pure Canadian maple syrup. Order from @deliveroo or @ubereats_uk if you live nearby, or put this on your list of "things to eat if we make it out of this alive". 🥞🍳 . Food: 4/5 Value For Money: 4/5 Service: 4.5/5 Decor / Ambience: 4/5 Overall: 4/5 . Halal status: Halal meats available on request. Alcohol and pork are served on the premises. . #halalblogger #foodblogger #breakfast #brunch #pancakes #steakandteeth #SAT
Mondays at work are always naan-staap! Luckily you can always stuff your sorrows away with a hearty stuffed naan from @naanstaap. . Pictured above are the moreish lamb keema naan and chicken achari naan, the soft and meaty shaami kebabs, and the lightly dusted masala chips. After rounding things off with a comforting karak chai, S and I left rounder than the naans themselves. If you're stuck on Green Street and need a break from the bartering and brawling, be sure to check them out for a quick bite. 🥞 (Pancake emoji because there isn't a naan emoji - what's up with that?!) . Food: 3.5/5 Value For Money: 4/5 Service: N/A (#invite) Decor / Ambience: 4/5 Overall: 3.5/5 . Disclaimer: We were invited to sample the menu at @naanstaap . #foodblogger #halalblogger #invite #naan #streetfood #lunch #dinner #steakandteeth #SAT
The dulche de leche cheesecake of your wildest dreams. A paella pan the size of your torso. Two pretty good reasons to visit @gustosevilla. . Located just around the corner from Seville Cathedral and La Giralda, @gustosevilla are known for their hearty paella pans for two, and have both seafood and vegetarian options available to satisfy your cravings. . Halal status: Seafood and vegetarian options available only. Alcohol is served on the premises. . Food: 4/5 Value For Money: 3.5/5 Service: 3.5/5 Decor/Ambience: 3.5/5 Overall: 3.5/5 . #foodblogger #halalblogger #travel #seville #spain #spanish #paella #dinner #steakandteethtravels #SteakAndTeeth #SAT.
Heavenly pistachio-crusted lamb chops, served with a sweet and creamy shallot pomme puree, and a sharp, vibrant pomegranate molasses. Fine contemporary Turkish cuisine from @mantlknightsbridge, sister restaurant to the equally-renowned @skewdkitchen. . Food: 4/5 Value For Money: 3.5/5 Service: 4.5/5 Decor / Ambience: 4/5 Overall: 4/5 . #halalblogger #foodblogger #themantl #mantl #dinner #turkish #steakandteeth #SAT
Five years ago, I would've scoffed at anyone who suggested visiting a fast-food restaurant like Mcdonald's, and probably have thrown my shoe. My better half S however, is a little more down to earth, and over time, has eroded a little bit - (just a little bit) of my self-righteous snobbery. The result? I can now appreciate the simpler things in life, like a cracking good triple cheeseburger from @bims_uk, washed down with a healthy helping of tiramisu. Check out their new Ilford branch, but be ready for those crowded queues! 🍔🍟 . Food: 3.5/5 Value For Money: 4/5 Service: N/A Decor / Ambience: N/A Overall: 3.5/5 . Disclaimer: We were invited to a pre-launch of @bims_uk 's Ilford branch. . #invite #foodblogger #halalblogger #burger #burgers #bims #bimsuk #fastfood #steakandteeth #SAT
Mention the words "peri peri chicken" and you'd be forgiven for saying "Here we go again", or hearing DJ Khaled's voice in your head - "Another one". Truth is, when @chicos_london invited us to their shiny new restaurant a few weeks ago, we had similar thoughts in the back of our head. . Much to our surprise however, we discovered a varied menu with mouthfuls of flavour. From the juicy lemon chilli wings and seriously messy loaded fries, right through to the tender chicken breast in creamy mushroom sauce ("Chef's Special"), there was no shortage of great dishes that will certainly have us returning for more. 🍗🐔 . Food: 4/5 Value For Money: 4/5 Service: N/A (#Invite) Decor/Ambience: 4/5 Overall: 4/5 . Disclaimer: We were invited to @chicos_london to sample the launch menu. . #invite #foodblogger #halalblogger #chicos #dinner #periperi #steakandteeth #SAT
SEVILLA! Very rarely do we visit a restaurant more than once whilst on holiday. In the case of @la_bartola_bar in Seville however, we made an exception. Partly because they were located directly opposite our hotel, but mainly because of their exceptionally diverse tapas menu. Creative, colourful dishes, fantastic flavour combinations, and minimal prices. Be sure to ask about the croquettes of the day, AND check what they have the daily specials board! Pictured: 1) Chocolate Panna Cotta 2) Salmon Tataki 3) Fried Cod 4) Red Pepper Croquettes 5) Red Thai rice 6) Fried Calamari Food: 4.5/5 Value For Money: 5/5 (Approx €20-€30 euros for two) Service: 5/5 Decor / Ambience: 4/5 Overall: 4.5/5 Halal / dietary status: Plenty of vegetarian, vegan and pescatarian options available. Alcohol is served on the premises. #foodblogger #halalblogger #tapas #spain #spanish #seville #travel #traveleats #SteakAndTeeth #SAT