If food-bloggers were animals, I reckon that many of us would be elephants. Not because we’re the same size as them or because we have the appetite to match, but because when it comes to food, we really do “never forget”. Whether it’s a phenomenal meal that blows our mind to smithereens, or an atrocious one that scars our very soul, we tend to remember every flavour, texture and emotion associated with a particular dish, and these memories will probably outlast those of our loved ones. (Sorry everyone).

But, whilst we do not forget, occasionally, we are willing to forgive. When Meathouse London opened their doors earlier this year, many were impressed with the carnivorous items on offer, and so, we went along with high expectations in mind. Unfortunately, our experience took a turn for the worst, and we left wondering whether we had had a stroke of bad luck, or whether the Meathouse just couldn’t cut it. As the months passed by, I decided that I wanted to give them another chance, and so, when a steak-craving took a hold of me last week, we headed on over to see if amends could be made.

Note: All the meat served here is certified halal. Alcohol is served on the premises.

Meathouse hosts a rather extensive menu, ranging from steaks and burgers, to sandwiches and seafood, ensuring that indecisive diners are doomed to stay that way. After much deliberation, Steak ordered a pulled beef burger with skinny fries and ‘slaw, which was the first to arrive, and instantly impressed. The pulled beef was soft, moist, and packed with deep flavours, meshing in wonderfully with the light and fluffy brioche bun. It was fantastic by all accounts, and a great deal of restraint was required on my part to ensure that I didn’t leave Steak staring at an empty chopping board. In fact, the only criticism we had was that we would have liked a greater volume of pulled beef. As for the accompanying skinny fries – we found them to be of a fairly good to average quality, with a crispy skin and a soft helping of potato within.

For myself, glancing through the menu was a pointless exercise, as I had already decided upon the signature 17oz Tomahawk steak. I opted for a medium-rare cook with béarnaise sauce and a side of chunky chips, and subsequently sat back to await a deliciously meaty death. Sadly, rather than my heart, it would be my tastebuds that would be assaulted into an early grave. As well as arriving well-done instead of medium-rare, the tomahawk steak had been completely smothered and choked in charcoal, obliterating the moisture and distinct flavour that it no doubt once had. The only question that remained was whether the cow of origin was a chain smoker, a shisha addict, or both.

Coupled with a fairly tough and dry texture, this bland, smoky steak became rather unbearable rather quickly. Whilst the accompanying bearnaise sauce was thick, rich and creamy, I knew that it could not mask the shortcomings of the steak forever. And so, for the first time in my life, I decided to send my dish back. Even now, I feel a great deal of unease at doing so, and frankly, I’m at least a little bit upset that this cow died in vain.

With sunset approaching, there was no time for another Tomahawk to arrive, and so, I opted for a “Juicy Lucy” burger instead. Once again, the beef had been overcooked, resulting in a lack of moisture and a significant dampening of its inherent flavours, which detracted from its otherwise soft and pleasant texture. Moreover, the “core of monterey jack cheese” and the pulled beef that should have sat on top of the patty were nowhere to be seen. The absence of these two constituents was compounded by a lack of sufficient sauce, resulting in a fairly boring burger that had very little going on in terms of texture and flavour.

On this occasion, I ordered a medium-rare 12oz ribeye steak, and anxiously waited to see what would arrive. To my delight, the ribeye arrived with a wonderfully firm, seared crust, and a beautiful rare to medium-rare cook. Due to the varying thickness of the steak, one end of it had cooked through to well-done, but despite this uneven cook, the steak remained, for the most part, tender and succulent, and each bite revealed a deep inherent flavour. It did however, require a touch more seasoning, and this was perhaps the only significant hole we could pick.

If your steak doesn’t say “MOO”, it’s pretty much wasted on you.

Whilst I enjoyed a hearty dinner, Steak decided to stay on the light side of life, and ordered a grilled chicken wrap with an additional helping of halloumi. The tender chicken and rich halloumi went hand in hand with the creamy mayo, resulting in a satisfying wrap that was in no way as tedious as it would sound. 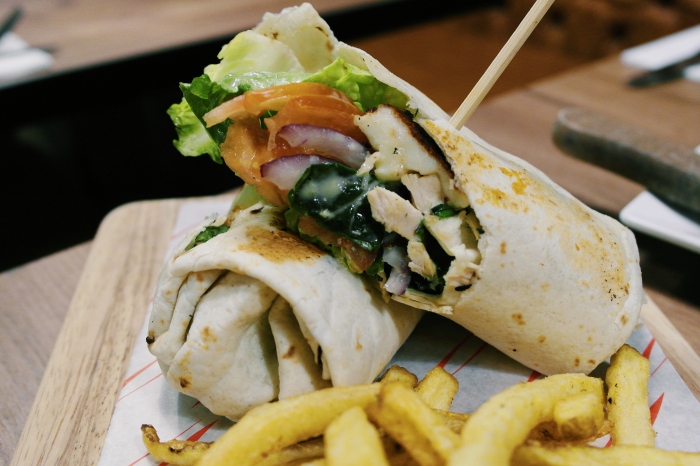 The Tomahawk steak came in at £37, whilst both the pulled beef burger and “juicy lucy” cost £12 with ‘slaw and choice of sides. The 12oz ribeye meanwhile, cost £24.95, whilst the chicken and halloumi wrap cost £7.45. Generally, starters range from £4-£7, sandwiches cost around £6, and steaks range between £17-£37. If you’re after a set of ribs, it’ll cost you between £12-£15, whilst burgers range between £7-£12, and desserts and drinks range from £4-£6. Relative to the location, and the quality and quantity of food, the prices at Meathouse are rather reasonable, and given that most – (if not all) of the main dishes come with sides in tow, you shouldn’t feel too out of pocket at the end of your meal.

On both occasions, the waiters and waitresses we encountered were polite, friendly, and welcoming, and service was relatively efficient. Staff members would often stop by our table to check how our meal was going, and ensured that we weren’t neglected or forgotten about.

Meathouse London is situated within a single-tier, brick-walled building, which, in itself, could resemble a vintage American diner. As you walk in, you’ll be greeted by a fresh, modern decor that sits in pleasant contrast to the aged, bare-brick interior. Comfortable leather booths and wooden high chairs are arranged neatly around the restaurant’s large and open dining space, and a variety of modern light fixtures lie overhead. It’s a ruggedly attractive set-up, and one can certainly appreciate the effort that has been invested. The restaurant can be found a quick ten minute walk away from Kings Cross station, and parking spaces within the local area may be a little difficult to come by. 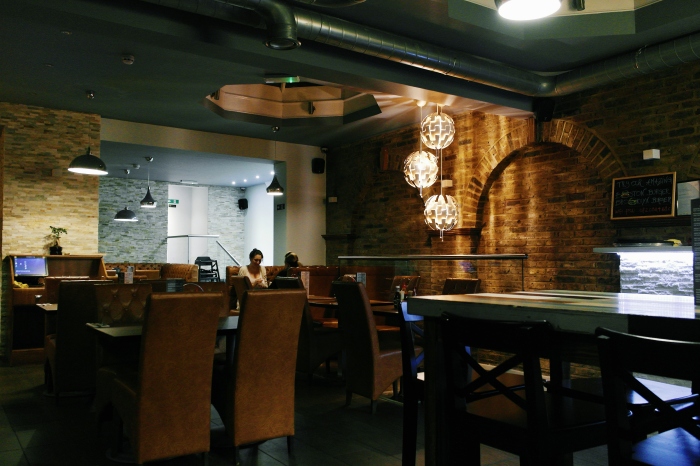 Together, the comfortable setting and courteous staff members help to create a rather amiable dining environment. There’s nothing exceptional to note, but rest assured, you’ll be able to kick back and enjoy a casual get-together with your dining companions.

After a fairly terrible first experience, it’s pleasing to see that Meathouse London can in fact, deliver a satisfying meal when they get things right. From the quality of their produce to the set-up of their establishment, they have all the necessary foundations to be a successful halal steakhouse in the heart of London. All that remains, is a consistent execution. At present however, there doesn’t seem to be anything that significantly captures one’s affections, leaving Meathouse firmly within the higher percentile of the average. Should you wish to indulge in an inexpensive steakhouse experience or simply find yourself in the area, they may be worth paying a visit, but you’ll no doubt find more exciting ventures elsewhere.