What is the worst thing that could happen to a food-blogger? Some would say “to get food-poisoning after a fantastic meal”. Others would say “to stand on the bathroom scales one morning and find you outweighed an average-sized elephant”. Ask me however, and I will tell you for a fact, that the two most horrifying things that could happen to a food-blogger are: a) losing the final draft of a blog post – (which nearly happened with our Sri Lanka guide last week), and b) watching your camera’s SD card commit suicide at the very end of a meal.

That is precisely what happened earlier this week, as S & I finished my belated 25th birthday meal at the highly-regarded Jamavar. As the entire evening’s photography disintegrated before my old and tired eyes, my ancient and already vulnerable mind collapsed into heartbreak.  Do I stupidly order everything again? Do I attempt to regurgitate and re-plate my food? Or do I do the unthinkable, and follow S’s suggestion of just using our iPhone photos? Alas, in a marriage, the wife’s logic always triumphs, and so, it is with a heavy heart that I bring you this week’s not-so-photogenic review.

With its rave reviews and its bold Michelin Star status, Jamavar’s “Pan-Indian” menu carries a reputation for excitement and prestige. Diving into the small plates, we ordered the scallops bhel – thick, juicy scallops on a bed of bhel puri, served with a tamarind and date chutney. Though visually impressive, the scallops lacked a significant sear, which prevented them from reaching their full potential. Fortunately, the crisp bhel puri and the sharp chutney offered some distraction, and rendered the dish somewhat memorable.

The murgh malligai however, soon captivated our attention entirely. The lean, green and exceedingly tender chunks of chicken paired wonderfully with the thick and creamy mango pachadi, and despite being a humble small plate, this dish proved to be our favourite of the night.

The same could not be said however, of the Andhra beef uthappam. Though slow-cooked in an assortment of mustard and southern spices, the beef wasn’t particularly tender, and lacked any real excitement in its subtle flavours. 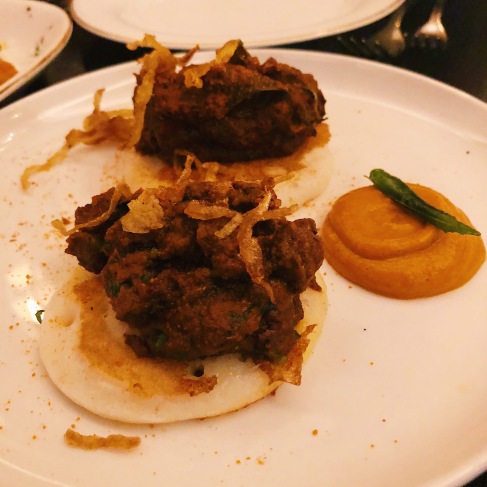 Similarly, the Malabar prawns offered a somewhat flat set of flavours, which was certainly a great shame, given the perfectly tender texture achieved in the prawns.

From the tandoor, we tried the Adraki lamb chops, which were infused with royal cumin, crushed onion, fennel, and ginger. The chops were undisputedly juicy and tender, owing to the divine thick cut and the majestic medium cook. However, aside from the heavenly texture, they too lacked any real punch or pizzazz in flavour.

Sadly, the most regarded item from the tandoor menu – the stone bass tikka, fared no better. Though each slab of stone bass was more or less perfectly cooked – with a soft, flaky texture that came away at the very sight of a fork, the subtle flavours seemed to be somewhat too subtle on this occasion, and failed to captivate the senses. What’s more, the accompanying avocado chutney somewhat overpowered, rather than complemented the fish, resulting in an imbalance that was clearly not intended.

After what was more or less a barrage of disappointment, we moved on to the dessert menu, and ordered a chilli chikki lava fondant. To our delight, the soft chocolate fondant was stuffed with both molten chocolate, and delicious caramelised pecans, which went hand in hand with the creamy cinnamon kulfi that accompanied it.

Our waiter also very kindly brought out a complimentary birthday mousse cake, which was rich, creamy, and in some ways, even better than the chocolate fondant.

Altogether, our meal amounted to just over £130 for two (£65 each). Relative to Jamavar’s Michelin Star status, and the relatively large portion sizes for said status, this would certainly have been a more than reasonable fee. However, despite sampling quite a fair few items from the menu and exerting our belts to bursting point, we were left, on the whole, rather disappointed. Aside from the murgh malligai and perhaps the chocolate fondant, there was not a single dish that inspired, dazzled or drew nostalgia from our tastebuds, which is to me, the very essence of a fine dining experience – (or rather, any dining experience).

Fortunately, Jamavar did not fall short when it came to service, thanks to the welcoming and courteous waiting staff who looked after us attentively throughout the evening.

Like many contemporary Indian restaurants, Jamavar adopts an attractive colonial-era decor. The main dining room features an elegant interplay of marble, brown timber, and brass elements, which help to create a refined ambience. Jamavar can be found a ten minute walk away from Bond Street station, and public transport is advised.

Having entered Jamavar with a fair amount of confidence that we would be both satisfied and blown away, we found ourselves spending the entire night waiting. Waiting for our tastebuds to be taken aback, for our senses to be awoken, and for a single striking dish to sear a lasting impression into our minds. Alas, we waited to no avail, and instead, left with a dining experience that was mundane and one-dimensional. By no means was our meal at Jamavar a bad one, but it was certainly not a memorable one either, and for a fine-dining establishment that boasts a Michelin Star, that is, in my book, a tragic failure.