Since buying my first car, I have felt a new sense of liberation. Suddenly, I am no longer bound to the confines of public transport – where oxygen and body odour are one and the same, and where personal space ends at the tip of one’s nose. By far the best thing however, is the fact that now, the obscure corners of London – i.e those that require approximately three days to get to by public transport, are now significantly more accessible.

Cockfosters – located on the far northern reach of the Piccadilly line, is one such place, and in the time before I had a car, I would probably have just chuckled at the sight of it on a tube map, and left it at that. However, when a contemporary Turkish restaurant by the name of Skewd Kitchen made an appearance in the area, I promptly bungled Steak into the passenger seat and entered “Cockfosters” into my navigational app – all the while praying that it wouldn’t lead us to some other lurid destination by mistake.

The menu at Skewd is by all means, a fairly usual Turkish and Mediterranean affair, albeit, with some contemporary twists. We began with a plate of honey-glazed goats’ cheese, served with a roasted beetroot puree, caramelised shallots and walnuts, a drizzle of aged balsamic, and a basket of house bread. Here, the striking sharpness of the beetroot puree and balsamic drizzle cut through the sticky, mature cheese, whilst the caramelised shallots and walnuts provided both a sweet and nutty balance, and a delightful contrast in texture. From start to finish, this was a masterful dish – well constructed, and flawlessly executed. We would however, advise that you share it between two (or ideally three or four) people, simply to minimise the risk of an instant heart attack.

In recent months, Steak and I have developed something of an aversion to “mixed grills”, but despite this, we decided to bite the bullet, put our tastebuds on the line, and give Skewd Kitchen’s “mixed kebab” a go. To our relief, the assortment of lamb shish, chicken shish, adana shish, lamb chops and lamb ribs that arrived had not undergone a second slaughter at the grill, and instead, remained delightfully tender and succulent. My only real gripe, was that some of the cuts could have benefitted from a touch more seasoning.

We also tried the humble lamb beyti, which was as satisfying as it was simple. Each piece of tender, lavash-wrapped, halep-smothered lamb delivered a vibrant kick, which was complemented by the bed of creamy hung yoghurt on which they sat.

As the cold wind raged on outside, I grew concerned as to whether my dwarfed companion would be able to walk back to the car without taking off. With health and safety in mind, I ordered a warm walnut pudding to weigh us down, served with crème anglaise and a mixed berry coulis. The warm pudding was soft, moist, and cakey in texture, and its sweet nuttiness served as a perfect winter dessert. I did however, wish that the mixed berry coulis had been a little sharper, so as to better cut through the richness of the pudding.

On a return visit to Skewd with The Goat Whisperer last week, I decided to opt for Skewd’s ribeye steak, aged for 56 days and served with hand-cut chips, bone marrow, and a portobello mushroom. To my delight and surprise, the ribeye – cooked to medium-rare, was wonderfully tender, perfectly seasoned, and carried a rich, buttery flavour. The accompanying bone marrow was also deliciously creamy, and I proceeded to soak the accompanying chips in the remaining juices. The accompanying peppercorn sauce – (which had been freshly crafted for us as it usually contains alcohol), was also pleasantly thick and aromatic. 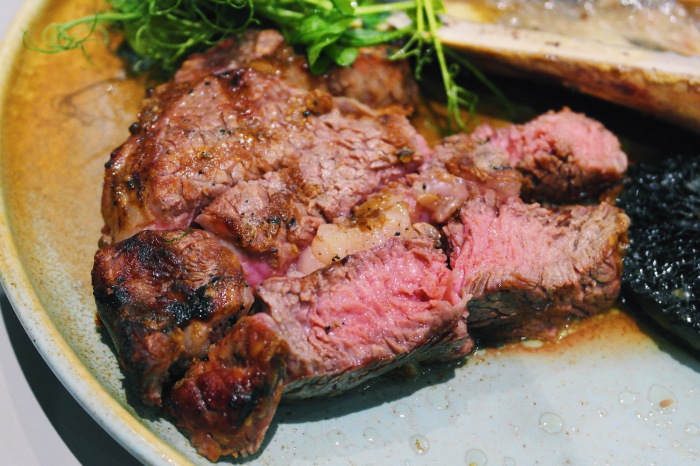 We also tried the “Baked Alaska” for dessert, which was composed of Ferrero Rocher ice cream and red velvet cake, all held within an Italian meringue casing. The soft cake and smooth ice cream were contrasted well by the firmer meringue, and provided a satisfying sweet touch to the end of our meal, without being overbearing.

Across the menu, you will find that starters range from £4 to £9, main dishes cost around £13 to £21, and desserts come in at around £6 to £7. Our own bill for two amounted to approximately £60, which, although a little steep for a casual meal, was not unreasonable given the relatively high calibre of the food.

Particular credit should also be given to the waiting staff, who were courteous and cordial throughout the evening, and did their utmost to ensure that we were well-looked after.

The restaurant itself boasts a rather neat and stylish decor, and in the evenings, you can expect to find a rather laid-back dining environment. For added convenience, the restaurant is located a short two minute walk away from Cockfosters station, and affordable pay and display parking is available on the parade outside the restaurant.

With a menu that is simultaneously traditional and novel, Skewd Kitchen is a welcome addition to the recent wave of contemporary Turkish restaurants. These establishments seek to modernise the format and delivery of Turkish cuisine, and move away from the “meat, rice, eat your food and pay the price” attitude of the old and gold eateries that led the way before them. Whilst many will see this as a form of “overpriced gentrification”, I believe this is a necessary step for the Turkish restaurant scene to evolve – in much the same way as the Indian restaurant scene has, and continues to do so. Undoubtedly, there is still some room for improvement, but if you’re ever stuck in the Turkish capital of North London, you would do well to try Skewd Kitchen’s modern interpretation of a noble and historical cuisine.

Halal status: All the meat served here is halal. Alcohol is served on the premises. Note – the peppercorn steak sauce usually contains alcohol, but can be crafted without. Please notify your waiter / waitress that you have halal dietary requirements.