Mention the phrase “tea party”, and I’ll probably picture a group of elderly diabetic women trying not to pass out from an excessive amount of digestive biscuits. Mention the word “frozen”, and I’ll probably have a month’s worth of nightmares of little children singing “Let it Go” at the top of their lungs – until I eventually tear my ears off and melt them in molten lava. So when Rahima Goga invited us to a preview of Tranquilitea‘s “Frozen Tea Party”, part of me panicked at the thought of these two horrifying scenarios being mashed into one. Fortunately, this was far from the case, and it was in fact, a unique eight-course ice-cream-based sugar-binge extravaganza. As both a food-blogger and a dentist, it was my honour – rather, my duty, to sacrifice my teeth and examine just how sugary such an event would be.

After a debut launch earlier this year, the lovely lady behind Tranquilitea – a home-grown dessert company specialising in all things cake and ice cream, is aiming to offer “The Frozen Tea Party” as a bespoke catering service for small and large events, and decided that a merry band of unimportant, expendable bloggers would make for the perfect guinea pigs. Indeed, if any of us dropped dead from spontaneous insulin resistance and pancreatic failure, she could sleep easy, knowing that we would not be missed. After settling into our seats and being blown away by the intricate decor crafted by Creative Events London, we awaited the sugary onslaught.

The first course to arrive would be Tranquilitea’s twist on a quintessential staple of the British tea party – a Victoria sponge ice cream cake. Forged from vanilla ice cream that had been filled with chunks of Victoria sponge, this decadent dessert proved to be one of our favourites of the night. The sweet, smooth ice cream contrasted wonderfully with the thick, cakey sponge, and the combination of sharp strawberry syrup, crisp white chocolate curls and crunchy rose petals enhanced the textural experience, as well as the aesthetic appeal. 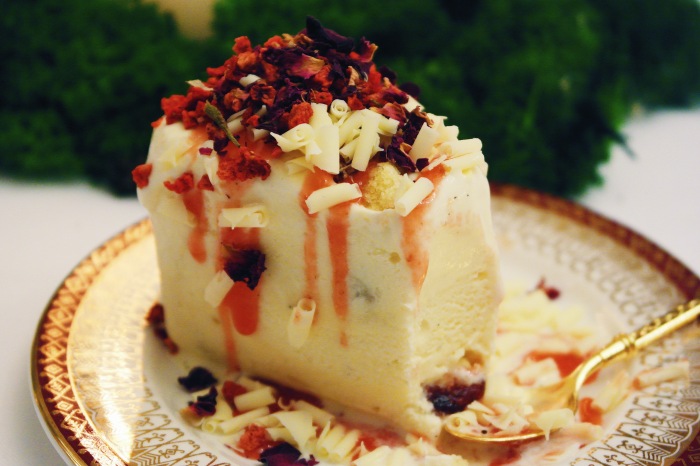 Indeed, presentation seems to be Tranquilitea‘s forte, as we were then served a teacup-shaped churro. This impressive display of churro craftsmanship was filled with a chocolate fudge cake ice cream and served with a side of molten chocolate, chocolate curls, popping candy, and golden confetti. The result was a rather fun spot of DIY, and whilst visually, the end result was enough to elicit a bit of dribbling, Steak and I felt that the sensory experience wasn’t particularly striking. The churro was soft, fresh, and light, but both the ice cream and the molten chocolate lacked the sense of richness that one would expect, resulting in a slightly muted dessert.

Of course, it would be downright sinful to consume so many sweet treats without having at least one dose of green tea to neutralise the calories, and so, the next course featured a matcha bubble tea ice cream – filled with mango boba and topped with mango sauce and tapioca pearls. As someone who loves matcha but doesn’t particularly adore bubble tea, this proved to be a bit of a mixed bag for me. The matcha ice cream was a little too subtle for my liking, whilst the mango sauce was sharp, but not quite sharp enough, and overall, the textures didn’t quite appeal to my senses. Several others however, seemed to enjoy it, so this may just be a bit of a marmite item.

As my vision began to blur with hyperglycaemia, a tiered selection of cannoli and rose sandwiches arrived before us. The firm cannoli pastry was nothing short of an utter delight, and the contrast with the smooth and creamy pistachio ricotta ice cream was akin to torture – mainly because I wanted to eat them all, but had little space in my stomach to do so.

By this point, my forceps-fingers grew itchy at the sight of so many people eating so much sugar, prompting Steak to remind me that it’s generally not polite to pull people’s teeth at a tea party. Our penultimate dessert course consisted of a thick matcha brownie topped with a sharp green tea and passionfruit ice cream, and an even sharper yuzu and mango syrup. The result was a refreshing sting to the tongue, which did well to cleanse our palates and awaken our sleepy, sugar-laden minds. The Hungry Sisters meanwhile, remarked that the brownie looked very similar to a certain “herbal” brownie found in Amsterdam, so one can only wonder whether they were sleepy because of something else.

A quick glance at the menu revealed that the next course was a “masala chai” – which made sense, given that a tea party isn’t really a tea party without some form of tea. The surprise soon came however, when it was revealed that even the masala chai hadn’t escape the icy touch of Tranquilitea‘s frozen fingers. A scoop of masala chai ice cream sat before us, topped with fragrant sugared fennel seeds, and served with cubes of homely cake rusk. Needless to say, this was a soothing end to our feast of sugar.

With our bellies on the verge of hypothermia, Halal Girl About Town decided that she wanted something warm, and accidentally set fire to one of the feathers that lay on the table. After I chivalrously recoiled and let her blow out the flames herself, Tranquilitea decided that it was time to send us off into the night with something hot – in case we started burning down her lovely home instead.  The “house hot chocolate” is what came next, and having had my fill of traditional Italian hot chocolate at Said Dal, I was half expecting a similar concoction – a thick molten chocolate that would be a little too rich for one person to drink alone. However, here the house chocolate was surprisingly light and balanced, and both its creamy consistency and rich character were in no way overbearing.

And with that, our sugar-binging evening came to a close. Our teeth were in tatters and our blood sugar was through the roof, but I think that all of us could agree that we had an incredibly fun evening. What’s certain, is that the concept of “The Frozen Tea Party” would be a great hit for birthdays, marital events and the like. Whilst there is a need for some fine-tuning with some of the proposed items, we think that Tranquilitea‘s craft and capabilities can only flourish further as time goes on. To book your own sinful sugar party, or to track down Tranquilitea’s next ice cream pop-up, head over to one of their pages below: