Over the last few months, I have developed a bit of an aversion towards Turkish restaurants. So much so, that the very suggestion of visiting one has, on multiple occasions, made me grimace, shudder and scream – almost as much as my patients do whenever they choose to visit me. The reason for this is not because I’ve come to dislike Turkish cuisine altogether, but rather, because I’ve developed a genuine fear of the overcooked, charcoal-choked meat that plagues so many of London’s Turkish eateries. Such is the extent of this overcookedophobia, that when Steak mentioned a new Turkish restaurant called Tarshish, I very nearly dismissed it as “another one of those”.

However, after a quick bit of digging, it became apparent that Tarshish was anything but a “typical” Turkish establishment, and when London Food Boy invited us to a blogger event just three weeks after our own solo venture, I found myself more than eager to return. Perhaps, just maybe, Tarshish could spell the end of my “cold turkey” attitude towards Turkish cuisine.

Halal status: All the meat served here is halal. Alcohol is served on the premises.

The contemporary menu boasts a seamless blend of Turkish, Mediterranean, and European influences, and does well to leave one uhm-ing and ahh-ing about what to order. Whilst Steak had done well to restrain me from ordering everything on the menu on our first visit, her taser had no effect on London Food Boy, who pretty much did just that. From the glorious spread of cold mezes, the red hummus instantly stood out with its vibrant mix of roasted red peppers, whilst the Tzatziki yoghurt – with its classic blend of garlic, mint and diced cucumbers, followed in at a close second.

From the selection of hot starters, the pot of sujuk grasped the bulk of my affections. Here, the soft and spicy Turkish sausage united with the rich tomato and basil sauce to deliver a sweet and comforting flavour. The plate of calamari that sat alongside it was equally satisfying, although opinions were divided on the soft and crumbly batter. Whilst I preferred the “melt in your mouth” factor, the others felt that it needed to be a little more crisp and crunchy.

Next, I tried the borek – a guilty pleasure of mine that is often a hit and miss affair. The soft, filo pastry instantly gave away, revealing an oozing mess of feta cheese, spinach, and pine nuts, which provided a reasonable range of flavours and textures. The feta did however, need to be far richer, with a stronger savoury kick to dominate the other components. Last but by no means least, we tried the grilled halloumi, which unfortunately, hadn’t quite been grilled to their full extent – no doubt, owing to their fairly thick and bulky size.

We also tried our hand at a couple of Tarshish’s mocktails. As is always the case, I had somehow managed to order the manliest mocktail on the menu – a giant pink “Sollero”, composed of passion fruit juice, passion fruit purée, a touch of grenadine and double cream. Smooth, creamy, and satisfying, it had the makings of my ideal mocktail, with the only missing element being a touch more sweetness within the cream. Steak meanwhile, had opted for the Berry Crush,  which was light and refreshing, but a little bit boring as far I was concerned. (I mean – it wasn’t even pink).

Masculinity squared: The Sollero and Berry Crush (£6 each)

By far the best mocktail we had was one that wasn’t even on the menu. Somehow, Halal Food London had asked the bartender to conjure up a secret drink, which was exceptionally sweet and sharp. Whether or not it ends up on the menu is down to Tarshish, but you could try your hand at asking for “the mystery mocktail”.

My first experience of a main course at Tarshish, (and the principle reason I was so eager to return), was a plate of lamb riblets – an item that is notoriously overcooked at Turkish eateries all over. To my surprise and to my delight, the riblets were exceptionally succulent, with a rich, buttery flavour, and an optimal level of seasoning. The sharp, salty crust coated the tongue, the soft fat melted away, and each riblet could be completely polished off. Quite frankly, it was the first time I had eaten lamb riblets at a Turkish grillhouse without having to visit a Stop-Smoking service the following morning.

Steak meanwhile, had opted for a chicken thigh steak, and this proved to be equally delightful. The tender chicken possessed a very soft and smokey essence, which wafted onto the palate with each bite, and enhanced the flavours within it – rather than smothering them out altogether.

In complete defiance of tradition, both items were served with a small but hearty bowl of mac and cheese, which had a crisp cheese crust, and a creamy, but surprisingly light core. Though an unconventional pairing by all accounts, it was far more interesting than the usual combination of rice and bulgur. The accompanying red cabbage coleslaw also added a satisfying crunch to the equation, and broke up the heavy mouthfuls of meat and macaroni.

On this occasion, I opted for a wagyu ribeye steak – served with mash potato, cherry tomatoes, and a mushroom sauce. Whilst the steak was exceptionally succulent and melted away in the mouth, it desperately needed a more substantial crust to elevate the sensory experience. The mash potato meanwhile, was lacking in flavour, whilst the accompanying mushroom sauce lacked both body and richness.

With bravery in her heart, Steak ordered the mixed grill, which unfortunately, followed in the footsteps of the usual Turkish grill affair. The chicken cubes were rather dry, the lamb cubes were slightly smoked out, and the only appealing piece of meat was the adana shish, which was both soft and flavoursome. 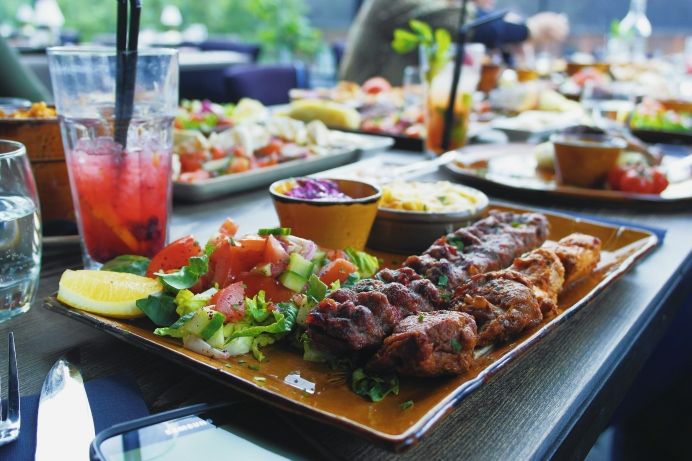 The lamb chops also proved to be a disappointment, as they arrived very much well-done, and thus, were dry and lacking in flavour.

Thankfully, the Iskender kebab saved the day. The tender adana, lamb and chicken lay smothered in a thick and luscious yoghurt, which paired wonderfully with the rich tomato sauce.

The lamb beyti also proved that Tarshish was still in touch with classical Turkish cuisine, as each piece of tender, tortilla-wrapped minced lamb exploded with flavour.

Full and satisfied, we began to seek out a way to cleanse out our mouths, but as Tarshish had no mouthwash at hand, we opted for a suitable alternative – the dessert menu. We began with the chocolate volcano cake, which was unfortunately both dry and stodgy with an insufficient core of chocolate sauce. What’s more, the chocolate itself lacked a rich chocolate flavour, and this resulted in a very underwhelming dessert. 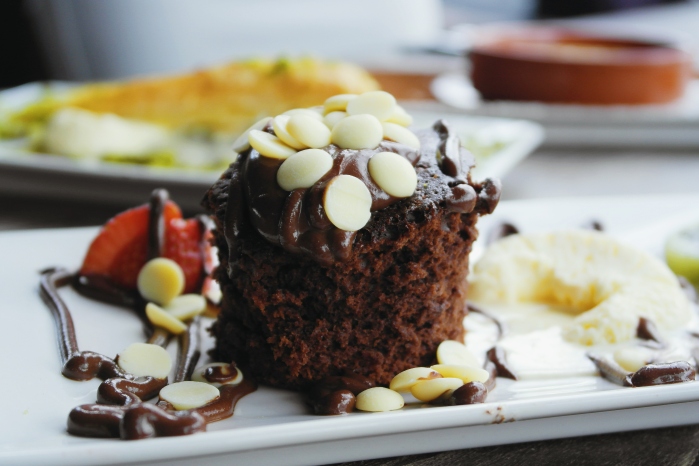 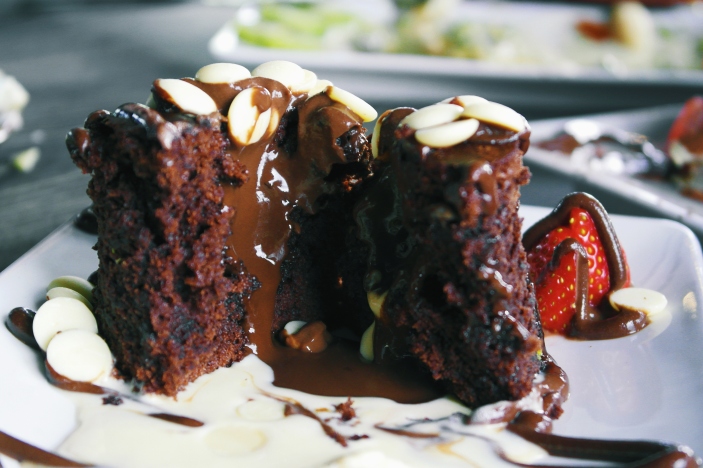 Chocolatey, but not chocolatey enough.

Alas, the tiramisu very much followed suit, with an excessive layer of chocolate powder that choked the palate, and a lack of both cream and espresso to moisten the layers of sponge. The creme brulee also failed to impress, as the custard base wasn’t quite as rich nor as smooth as I wanted it to be. 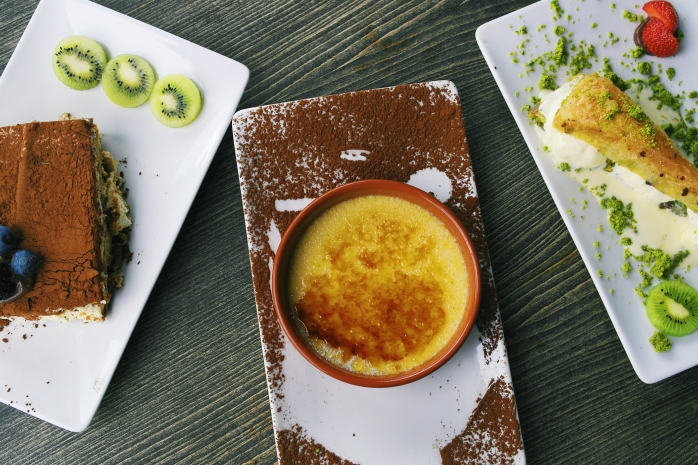 Surprisingly, it was the most conventional and unassuming dessert – the “warm baklava” that left us clamouring for our spoons. The rich and cakey filo pastry was unlike any baklava we’ve eaten before, and the rich essence of pistachio traversed its entire depth. In combination with the crumbly mess of chopped pistachio, and the soft scoop of ice cream, this seemingly boring dessert served as a perfect example of why you shouldn’t judge a dish by its name on the menu. 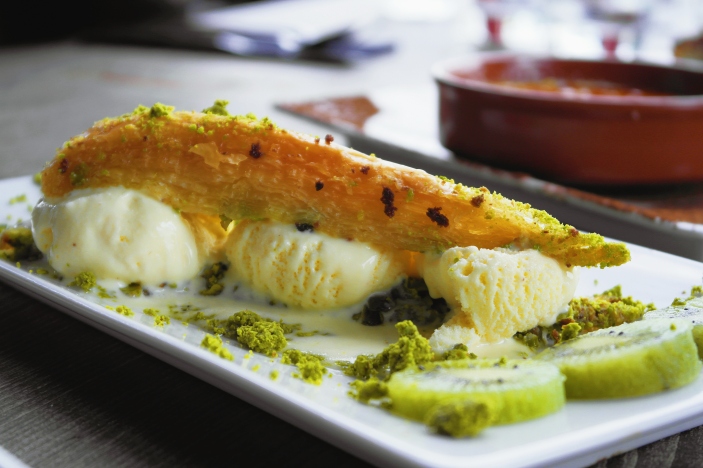 Starters at Tarshish cost around £5 to £7, main courses range from £15 to £20 – (or £38 for wagyu steak), and desserts cost around £7, making it at least a little bit pricier than other Turkish restaurants in and around Wood Green. However, when one considers the quality of the food and the “rooftop” dining experience that Tarshish has to offer, it really is a rather reasonable price to pay.

The calibre of service is also worthy of praise, as the waiting staff at Tarshish are every bit as attentive as they are courteous. Service is also rather efficient – although, we did notice that the mocktails took a little bit of time to come through.

Where Tarshish truly stands out however, is in the style and grace of its contemporary decor, which is almost completely at odds with the surrounding area. That is not to say that Wood Green is run-down or unattractive, but rather, that the bright, glass-fronted dining space that Tarshish offers is something that one would expect to find by the Thames riverfront, or in a more centralised location. One can only commend the clean, crisp, and impressively spacious set-up, which exudes a sense of comfort and class, and almost crosses the border into casual fine-dining. The restaurant itself can be found a quick hop away from Turnpike Lane station, and parking is available on both nearby roads (free after 6:30pm), or at the nearby Wood Green mall car park. 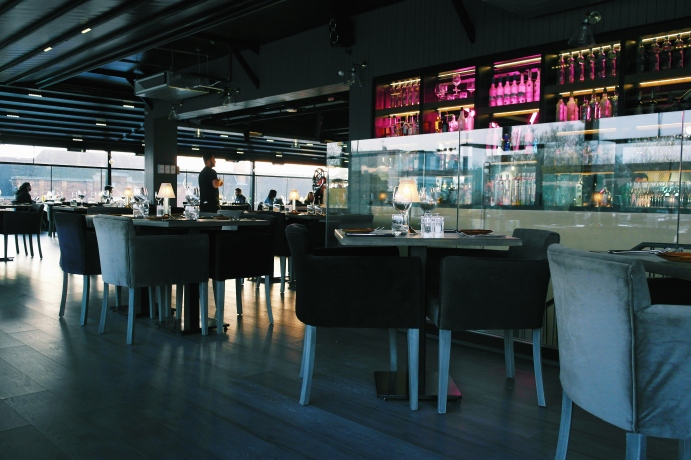 When it comes to Turkish cuisine, there are two broad categories that restaurants can fall into: the traditional, low-key eatery that serves up a spot of simple grub, and the modern, high-end establishment that serves up a more “European” dining experience. Up until now, I may have agreed with my good old Uncle Cruise, who once stated that “Turkish cuisine is not made to be poncey or affectatious”, and that “modern” Turkish restaurants are simply a watered-down version of a simple and hearty cuisine.

However, as Tarshish have proven, “traditional Turkish food” and a “contemporary dining experience” need not be mutually exclusive terms. Though they may stray from convention, they do so in a way that retains and respects the vibrant culinary traditions of the Mediterranean, and provides a breath of fresh air for a new generation of patrons. There is certainly a large scope for improvement – (particularly with the desserts), but after leaving with a fresh pair of lungs and a charcoal-free tongue, I can say that Tarshish have done well to restore my faith in Turkish dining.