When you’re invited along to sample a new menu, you never quite know what to expect. Will it be an updated version of a restaurant’s old menu? Spruced up with a facelift and a dash of botox? Or will it be a complete overhaul of everything you’ve come to know and associate with the restaurant in question? Well, when Red Iron invited us to a preview of their new “contemporary dining experience”, we certainly thought it would be the former, and it was only when we joined our fellow bloggers in a lavish new dining room at the back of the restaurant, that we realised Red Iron were making a radical change to their craft. (And not the kind of “radical” that earns you a holiday with MI5). 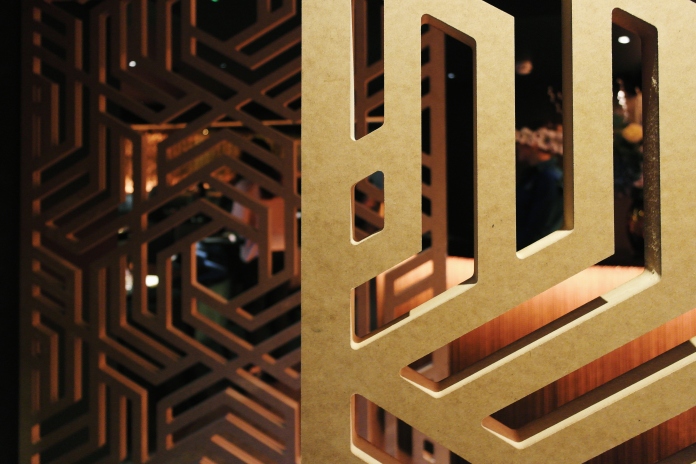 As we settled in amongst the vogue surroundings, I took a glance at the lengthy five-course menu that lay before us, and promptly called my solicitor to ensure that my will was still in order – just in case I managed to eat myself to death by the end of the night. We began with a small platter of mini brioche bread rolls, consisting of green polenta, orange poppy, yellow poppy (my favourite of the lot), and red sesame rolls – each with a corresponding colour, which did well to remind me of the childhood days I spent eating crayons. Each roll possessed its own set of nuances, and the d’Isigny butter they were served with added a rich and salty touch that satiated our appetites. (Or in the case of Halal Gems, destroyed it altogether). 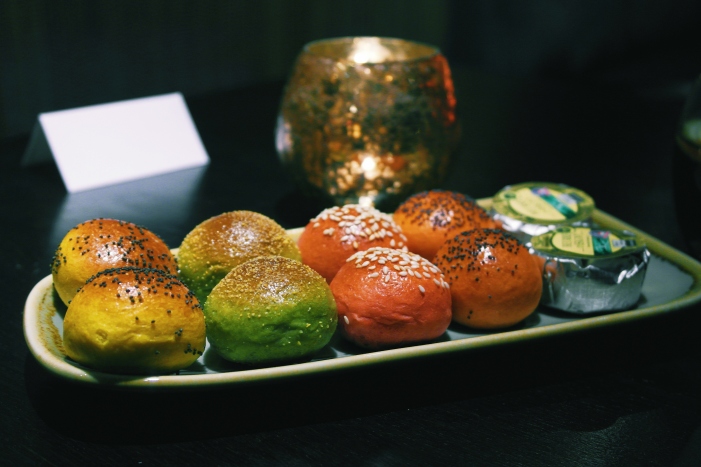 Next, we were given a couple of plates of beef carpaccio – comprised of a thin slice of Irish Hereford beef fillet, crispy shallots, capers, rocket, and grated parmesan, all laced with a balsamic vinaigrette dressing. The thin beef was soft and light, and contrasted wonderfully with the crunchy rocket and the crispy capers, which unleashed a delightfully musky aroma with each bite. This was elevated further by the sharp and acidic dressing, which cut through the blank, savoury canvas of the beef, and stung both the palate and the tongue. 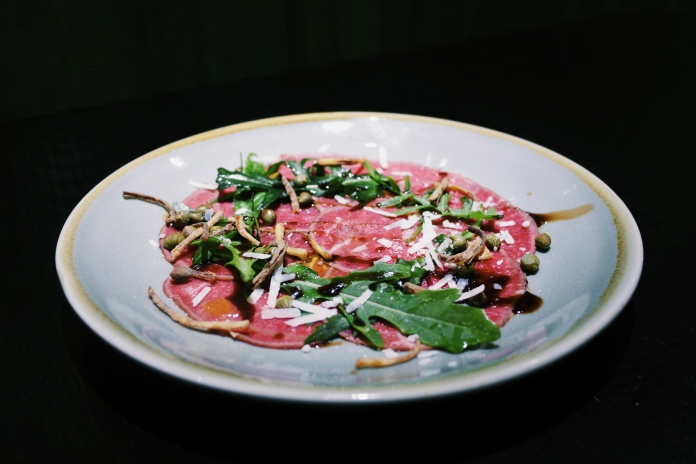 Such was the sensory experience offered by the carpaccio, that the other starter served alongside it – a plate of sautéed king prawns with an avocado salsa – seemed rather flat and dull by comparison, owing principally to a lack of adequate seasoning. 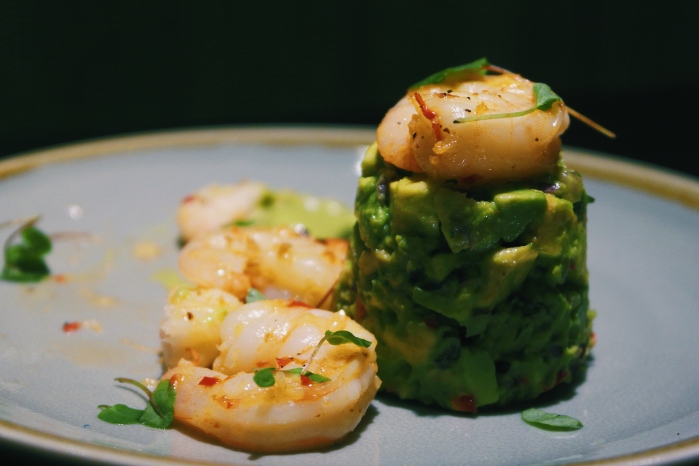 We were then treated to a sorbet course to help cleanse our palate ahead of the mains, and this was very much welcomed by the self-confessed sorbet monster that is Steak. The lemon sorbet was delightfully sharp and refreshing, whilst the orange sorbet was both sweeter and smoother in its flavour – and according to Steak, tasted remarkably like a Calippo ice lolly. Regardless of whether Red Iron melted down a box of Calippo or made the sorbet from scratch, both scoops certainly did the trick.

As we waited for the USDA prime fillet and the Grade A5 Japanese wagyu sirloin that would serve as our main course, Juel – Red Iron’s proprietor, proudly paraded a selection of the other cuts that Red Iron would be serving on their new menu. By far the most impressive looking cut was the wagyu ribeye, and as Haloodie Foodie glanced over the impressive display of marbling, I could see his eyes light up like a Christmas tree covered in fog lights. 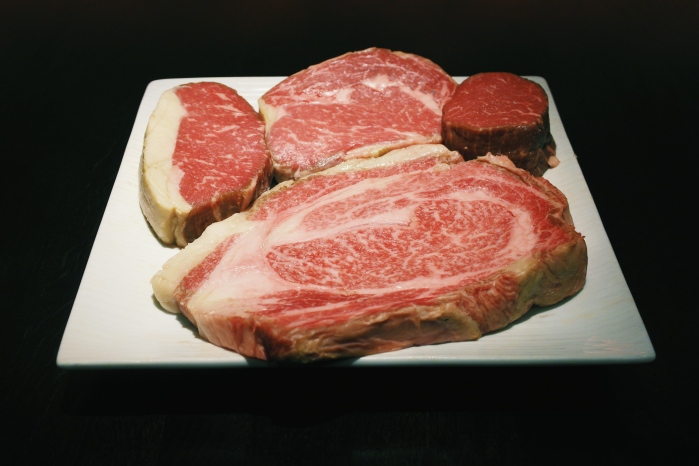 When our cooked steaks did arrive, we were somewhat taken aback. The wagyu sirloin immediately stole the show, with a rich and buttery texture that literally melted away in the mouth. The crisp, and surprisingly light fat that sat at the end of each slice was equally creamy, and the intensity of the flavour to be found within the wagyu was unlike any other cut we’ve encountered. Rather amusingly, Steak declared that if she ever ended up on death row, she would choose this wagyu steak as her last meal, which prompted me to remind her that as a psychopathic dentist, I was far more likely to end up on death row than she was. 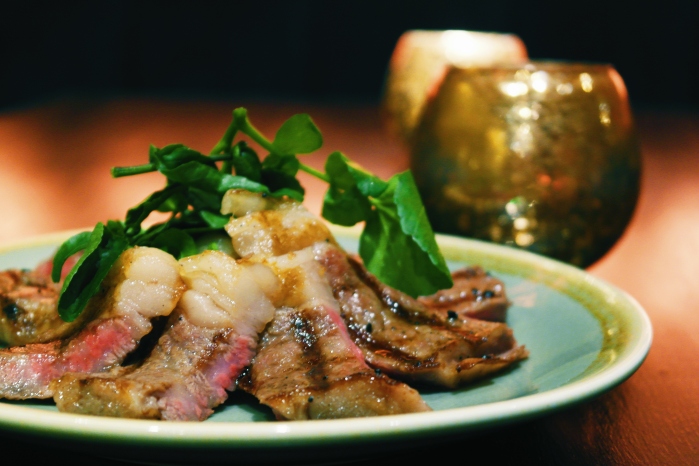 As was the case with the wagyu, the USDA prime fillet arrived with a perfect medium-rare cook, and the tender beef offered no resistance to our sharp knives. However, the flavour within the fillet was far more pungent and mature than that within the wagyu, and both Steak and The London Haloodie found the intense tang to be a little off-putting. I however, appreciated its potent aroma – although, it certainly wasn’t enough to steal my affections for the wagyu. 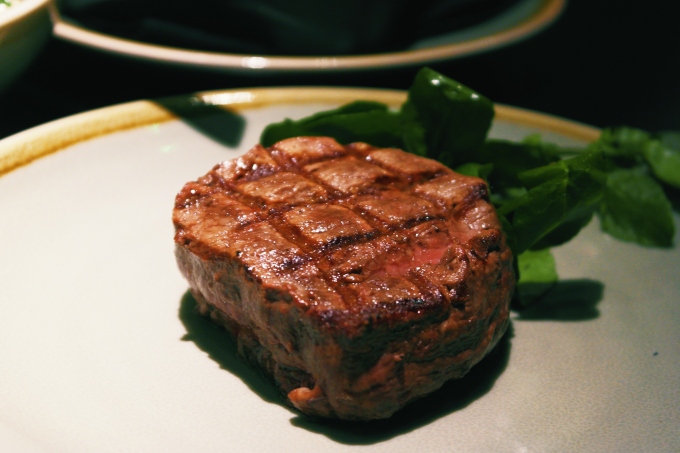 To accompany our heart-stopping steaks, we were given a generous helping of sides, including a bowl of triple-cooked chips, a skillet of mac and cheese, and a bowl of creamed spinach. Whilst the thick and crispy chips were fiendishly moreish, the mac and cheese fell flat in terms of both texture and flavour, and this was relayed back to the chef.

To round off our meal, (and the rapidly growing mound over our abdomens), a giant bowl of sticky toffee pudding was set upon our table, accompanied by a tall glass of lemon posset. Composed of a rich lemon and vanilla compote, fresh strawberries and a rubble of vanilla shortbread, the lemon posset was as light and refreshing as it was rich and creamy. Each bite revealed the sharp, citrus flavour of the compote, which unified with the juicy sweetness of the sliced strawberries, and was then promptly muted by the malty finish of the crumbly shortbread.

Whilst Steak preferred the simple satisfaction offered by the posset, my sinful tolerance for decadent desserts led me to favour the sticky toffee pudding – principally because it’s an old family favourite. Though the soft date sponge wasn’t quite as fluffy as my dearest Aunt Berry’s, the hot and sticky toffee sauce was every bit as rich, sweet, and caramelised as it should have been, and sat in perfect juxtaposition with the cold vanilla ice cream. Whilst Halal Girl About Town remarked that every bite was going “straight to her thighs”, for me, every bite went straight to my hippocampus, and reminded me of the hungry-hippo thighs I had as a pudding-scoffing child.

As we bid our goodbyes and readied our passports for the long drive back to the East, Steak and I couldn’t help but feel somewhat impressed by the calibre of the food that Red Iron had served. Of course, there were a couple of items that needed a lot more work, and I have no doubt that a great deal of extra care went into the preparation of the food – on account of it being a bloggers’ preview event. But, if one considers the kind of simple grub that Red Iron are known for, and then takes a look at the refined dining experience that they are now aiming to offer, it really is quite admirable to see the ambitious leap they are trying to make. Indeed, when I last visited Red Iron, I remarked how tired everything seemed, and it really is rather pleasing to see that they are trying to push the boundaries of what they can achieve. I for one, have high hopes and high expectations for the upcoming menu,  and when it (hopefully) launches this summer, I will certainly be making a return to try the final product.

Disclaimer: We were invited to sample the new menu.