For many food bloggers, there comes a point when food ceases to be a basic necessity or a deeply-rooted passion, and starts to become something of an unhealthy obsession. In most cases, it can be extremely difficult to identify the signs, and many don’t realise that they’re descending into a state of food-obsessed madness until it’s already too late. For myself, the realisation that I had reached the point of no return came when I decided to “find SALT”. Sprawled across the smoking hot sands of Kite beach, “SALT” is an open, truck-based burger eatery that has gained something of a legendary status, both within and beyond Dubai. As such, I was determined to pay them a visit, and even abandoned Colonel Kentucky, Ulcer, and Afroman, as they chose to spend a frivolous day at a water park instead. After all – who needs friends, when you can have food?

Making my way to SALT after a solo tour around Dubai, I put my trust into a local commuter, who told me to get off the bus a few stops earlier than I had planned. It was only when a man on the beach pointed to a faint outline of a mosque in the horizon, that I realised I had made a fatal error in judgement. With no taxi in sight and no real idea as to when the next bus would arrive, I decided to walk the odd mile or two that remained between me and my precious SALT burger. Like Lawrence of Arabia or The Man With No Name, I trekked through the barren sands, which seemed too hot even for the Emiratis. My skin began to melt, my beard began to photosynthesise, and just as I began to wonder whether – in the event of my death, I would go down as the most dedicated (or the most stupidest) food blogger on the planet, the outline of SALT’s encampment came into sight.

Note: All the meat served here is halal.

With no real certainty as to whether it was a mirage or whether I had passed out into a dream, I hoarsely asked for a mint lemonade. Though it wasn’t particularly sharp, I was in no position to complain, and found it to be refreshing all the same.

With my hydration levels stabilised, I proceeded to order a pair of SALT’s classic wagyu sliders, and quickly discovered why they have come to be so popular. The soft, succulent wagyu patties possessed a deep and rich flavour, and came with a perfect level of seasoning. The American cheese had also meshed right into them, creating an exquisitely gooey and sticky mess, which was rounded off by the crunchy pickles and the soft, airy buns. From the first bite to the last, each component transitioned seamlessly into the next, creating a continuous flow of complementary textures in the mouth. For me, these simple burgers were simply incredible. 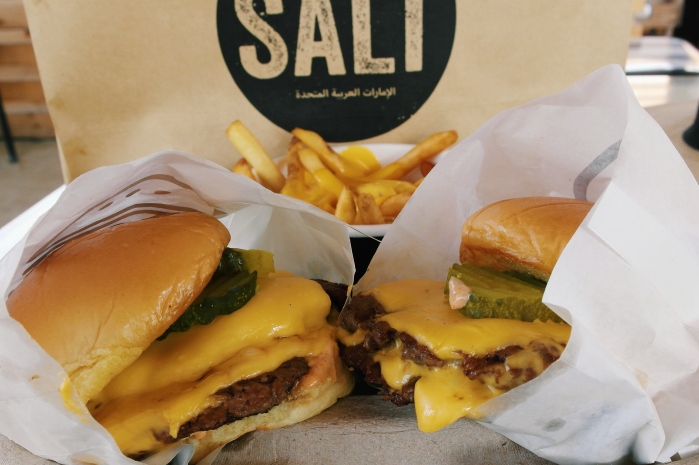 Delirious from my heatstroke, I had also ordered a portion of cheesy fries. Though the fries themselves were thin, rustic, and carried a pleasantly salty touch, the soft cheese quickly became overbearing. Opt for the regular fries instead, and save yourself from a cheesy death. 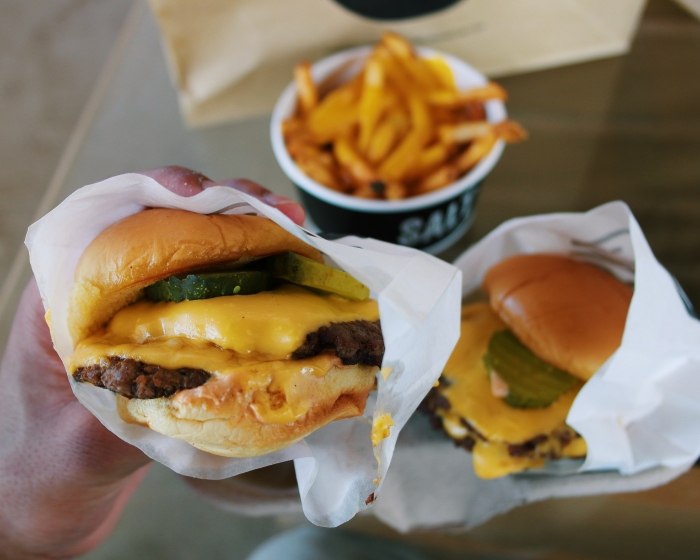 For dessert, there could (literally) only be one choice – SALT’s famous lotus softie. Surprisingly, the bulk of the flavour came from the crumbly lotus topping and rich lotus sauce, both of which delivered a strong flavour of lotus biscoff. By contrast, the smooth and thick soft serve itself was a little more plain in nature, but this ensured that the softie as a whole wasn’t too sweet to handle.

The duo of doubled-up wagyu sliders cost AED40 (£8.70), whilst the cheese fries and lotus softie came in at AED17 (£3.70) and AED20 (£4.35) respectively. Across the rest of the menu, sliders range from AED30-AED50 (£7-£10), fries range between AED12-AED25 (£2-£5), and drinks and milkshakes range between AED13-AED25 (£2-£5). Whilst the burgers themselves aren’t particularly large, the double dose is fairly filling, and the quality and satisfaction that they offer is second to none. As such, the prices, (which are in keeping with that of other Dubai establishments anyway), are well worth paying. It’s worth bearing in mind however, that when I visited, the British pound was still worth a British pound.

As is the case with many eateries in Dubai, service at SALT was more or less faultless. The friendly staff members provided a warm welcome (both figuratively and literally), and worked at an exceptionally speedy and efficient pace.

In keeping with its ethos of simplicity and informality, SALT is fittingly housed on the Kite beachfront, and consists of a single, steel “Caravan kitchen”, an assortment of al-fresco tables and benches, and an air-conditioned, glass-enclosed dining room for heat-phobic foreign wimps like myself. This minimalistic set up is exceptionally refreshing, and when you have a view of the Persian Gulf, there really is nothing else you could ask for. Except perhaps, for a sunset, which I unfortunately missed out on, as my friends were unwilling to join me at SALT in the evening. (One can only assume that it was too romantic a suggestion for them).

As I visited SALT in the middle of the day, there were no more than a few customers hanging around. As a result, the dining space lacked the vibrant atmosphere for which SALT is otherwise renowned, but one can certainly imagine that in the hours before and after dusk, this beachfront burger bar must host an incredibly lively environment.

In recent years, the definition of a good gourmet burger has come to encompass a plethora of weird and wacky combinations. In this new world filled with monstrous burgers that could probably eclipse the sun itself, SALT has decided to take a step back, and strip the All-American cheeseburger back to its basic elements. Such a move is certainly bold, given the tendency for our generation to become bored within the blink of an eye.

But, by stripping away the frills and frivolity, SALT reminds us that a good burger shouldn’t need a kilo of beef brisket or a hundred rashers of turkey bacon to make it interesting. Rather, the burger itself should do the talking, and it can certainly be said that the beauty of a SALT burger lies not in a secret sauce or a novel constituent, but in the sheer simplicity of its formulation. They have, in essence, recreated the quintessential American cheeseburger, and with it, an experience of flavour, texture, and sentiment that simply cannot be missed.