Choosing between a sweet or savoury brunch is quite possibly one of life’s most difficult decisions. As our better sense of nutritional judgement calls for “poached eggs and avocados”, our sinful sweet tooth screams for a stack of fluffy pancakes, and the truth is, we’d really just like to have both. Perhaps that is why many Londoners – (myself included), have developed a certain amount of fondness for the “All-American breakfast”. As well as being the reason why a “family-sized” car from America can double up as an industrial-sized lorry in Britain, the All-American breakfast combines the seemingly disparate elements of sweet and savoury into a single plate of American ingenuity. (And believe me, I don’t put those two words together lightly).

But alas, the inclusion of bacon in just about any American breakfast has made it extremely difficult to find a halal / vegetarian-friendly alternative, and outside of the likes of “The Breakfast Club”, there have been few, if any options. Until now.

Last weekend, Boondocks launched its All-American weekend brunch menu, complete with an assortment of meaty, cooked breakfasts, and rich sweet treats. Being the exceptionally greedy individual that I am, it took nothing more than a single glance for me to drag Steak, Misery and Napoleon to Old Street in the relatively early hours of last Saturday morning.

Consisting of two poached eggs, two buttermilk pancakes, a pile of maple-glazed beef bacon and a slab of “beef sausage”, the “Boondocks Supreme” carried the precise DNA of my ideal breakfast. Meat, sweet, and a whole lot of protein. As the poached eggs oozed with a heavenly yolk, the soft and fluffy pancakes simply fell away, delivering a subtle sweetness that underpinned the rest of the components. The beef “sausage” meanwhile, seemed to better resemble a slab of beef meatloaf. With a fantastically dense and firm texture, it went hand in hand with the sticky, chewy maple-glazed bacon and the crunchy hash browns, and together, they provided a stark contrast in texture to the softer elements on the plate. As sweet, savoury, soft and firm clashed and combined with every single bite, I couldn’t help but feel as though I was eating three mighty breakfasts in one – and that’s a level of efficiency that you simply can’t beat. 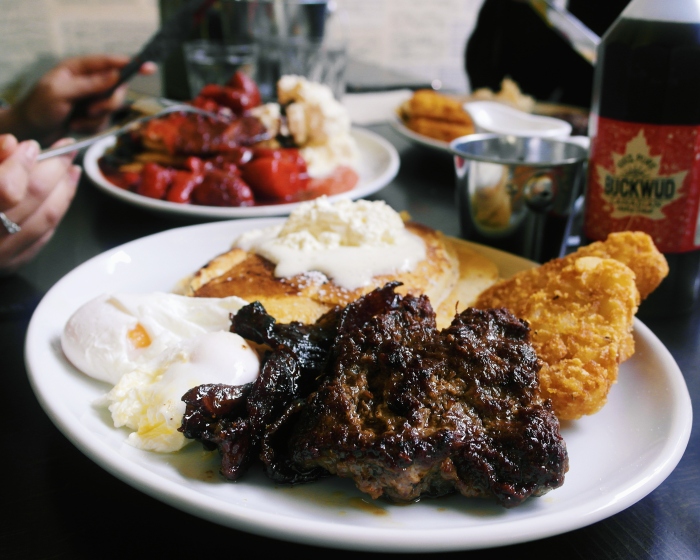 As I did battle with the supreme, Steak took on the behemoth “pancake monster”, consisting of two blueberry pancakes, two chocolate chip pancakes, a dollop of airy whipped cream, and a pile of roasted strawberries. Once again, the pancakes were beautifully moist and fluffy, with only a slight touch of stodginess in their core. Both the blueberry and chocolate chip delivered a mighty kick of their respective flavours, and as we shovelled them into our mouths, they melted away like a Hollywood star’s plastic surgery on a hot summer’s day. The monster was however, somewhat spoilt by the pungent, tangy sweetness of the roasted strawberries, which completely overwhelmed the pancakes when eaten in combination. As a result, they remained largely untouched, and we scoffed up our pancakes with a combination of syrup and cream instead. 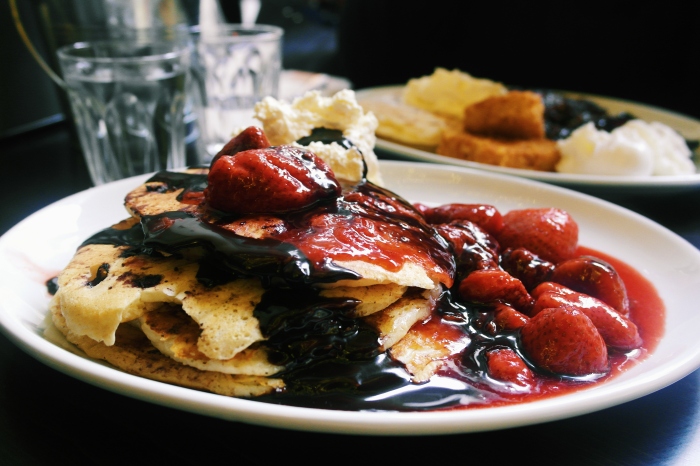 Both the Boondocks Supreme (£13.75) and Pancake Monster (£9.95) were – (in our opinion), very reasonably-priced in relation to the quantity, quality, and calibre of the components used. As someone who usually eats lunch just a few hours after eating “brunch”, I was astonished to find that my appetite remained unstirred throughout the afternoon. My brunch at Boondocks then, may just be the first real “brunch” that I’ve ever eaten. Given the amount of shame I felt at having only eaten two big meals in one day, it will probably be my last too.

(Please refer to our full, in-depth review of Boondocks).

The Boondocks brunch menu is a welcome addition to London’s bulging breakfast scene, and that holds especially true for halal foodies. Sure, it would have been nice to have a few more “sweet meets savoury” options, more exciting pancake formulations and perhaps a breakfast waffle or two (which are only available on Fridays), but in its first iteration, the “Boondocks House of Pancakes” serves a fairly extensive range of breakfast items that are tailored to a wide range of greedy British tastebuds. The time has certainly come to give the halal Full English a rest, and join our American neighbours, as they experience two heart attacks and a stroke before the day has even begun.