Having spent the better part of four years in Whitechapel, I would’ve liked to have thought that I had every eatery of interest in the area under my radar. It’s certainly the least you’d expect, given that I probably spend more time at the dental hospital than I do at my own home. You can imagine my surprise then, when one of my followers kindly suggested that I visit the “Grounded Coffee Company” in Aldgate East, an independent coffee shop which, until then, I had not heard of.

A few weeks passed by, and a number of food-bloggers and food-enthusiasts began visiting this cafe, and I remained perplexed as to how I could have missed it. Perhaps my squinty eyes were at fault, or the fact that I’m 23 and should really be making funeral arrangements as my vision and mental capacity begin to deteriorate. Whatever the reason for my shortsightedness, I was excited at the prospect of a local coffee shop with a full, halal menu. Could this be a new breakfast spot for my Brothers In Iron and myself? A new hub for my productivity? A new coffee-crackhouse in which to feed my bewitching addiction? The only way to find out, was to embark upon yet another nomadic study day.

Note: All the meat served here is halal.

After settling into a small corner table, I promptly ordered a “beef sausage breakfast” and a flat white. The flat white arrived with a thick, velvety layer of microfoam, which was both light and airy, but as a whole, the cup was about as balanced as a one-legged donkey. The steamed milk had completely obliterated the espresso, leaving no bitter punch, no delicate aftertaste, and virtually no trace of the original coffee. The barista had, in effect, created a remarkably weak latte at best, and a cup of coffee-flavoured milk at worst.

Despite somewhat losing my faith after this debacle, I decided to give them another chance at lunchtime, and ordered a single espresso. It arrived with a smooth layer of crema, which delivered a smooth and subtle bitterness. The espresso possessed a delicate acidity and a deep, rich body that was almost caramelised in nature. Its presence lingered on the tastebuds, and somewhat soothed the pain and anguish that was inflicted by the atrocious flat white. Individually, the flat white would have earned Grounded a coffee score of 1/5, had the espresso – which was worth of a 3.5 or a 4 – not salvaged them.

After a rocky experience on my last visit, I reluctantly decided to revisit Grounded earlier this week for a laid-back breakfast with Blue Eyes and President Clinton. I promptly lowered my expectations and ordered a beef breakfast and a piccolo – only to be pleasantly surprised by the calibre of both. The piccolo possessed a thick layer of microfoam and a moderately rich and robust bitterness, which, in an instant, earned my forgiveness on behalf of the poor flat white that I had been served before. 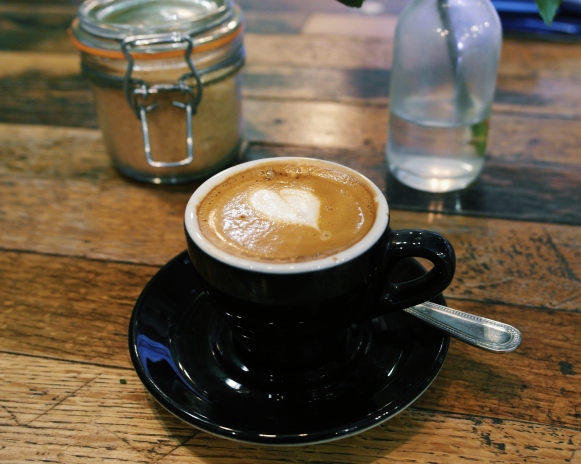 The beef sausage breakfast – (which consists of two fried eggs, two beef sausages, a piece of sourdough toast, baked beans, turkey bacon, baby mushrooms and a grilled tomato), also seemed to have vastly improved. The eggs had been fried perfectly, and the beef sausages were soft, fatty, and full of flavour, with no sign of the hard cartilage pieces encountered previously. The improvements continued with the turkey bacon, which, although still of a processed quality, remained soft and thick, and was nowhere near as rubbery as before. The sourdough toast however, seems to have deteriorated, as my slice possessed a woefully stodgy core, and a rock-hard crust.

The baby mushrooms meanwhile, provided a pleasant complementary texture, whilst the tomato was soft and moist, and delivered some palate-cleansing action. Unfortunately, I’m not an expert on baked beans, (whereas Steak could tell you if they were made by Heinz, when they were produced, and the atmospheric conditions of the factory in which they were packaged), but I can say that they were of a reasonable quality, and served in sufficient quantities to bring the whole breakfast together.

For lunch, I ordered a chicken, mushroom, and olive quiche, and agreed to an accompanying salad, which turned out to be composed of beetroot and red lentils. The quiche seemed to be imitating an Englishman in Majorca, given that it was severely dehydrated and over-baked. The pastry for one, possessed a desiccated, straw-like texture, which was about as devoid of life as a dental student with a blog. Both the chicken and the cheese were also exceedingly overcooked and dry, and the cheese in particular resembled something of a foam sponge. The contents, as a whole, were bland and unsubstantial, and the accompanying beetroot and red lentil salad desperately needed a third element to break its mould of relentless tang. Perhaps this was a one-off bad batch, but I’d think twice before ordering Grounded’s quiche again. 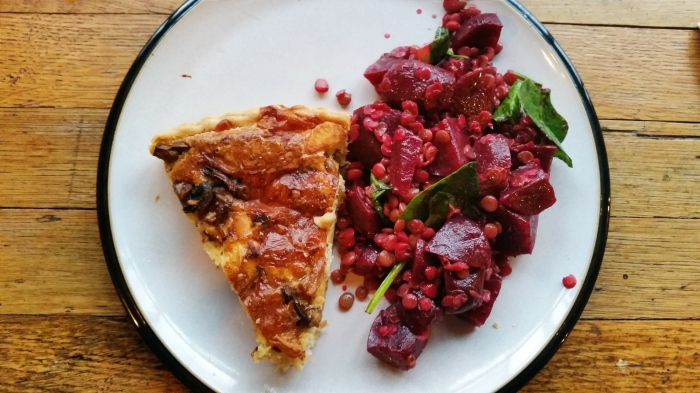 Chicken, mushroom and olive quiche with a beetroot and red lentil salad

Once again, I sinfully skipped on Grounded’s sinful selection of bakes and cakes, and I promise that it shall not happen next time. In the meantime – take a look at those steroid-abusing cookies! 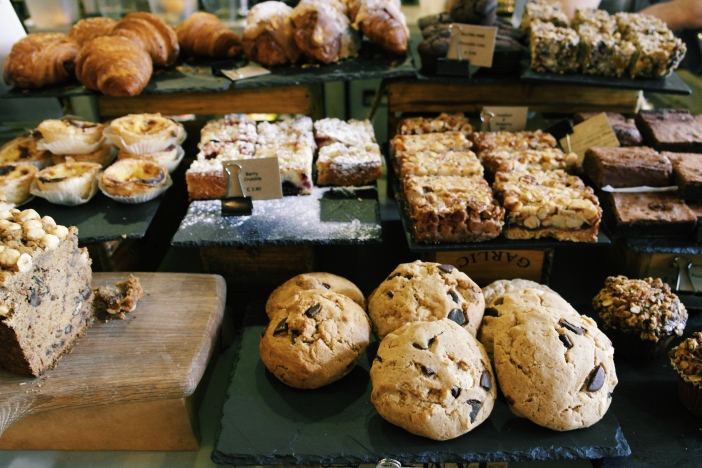 The beef breakfast came in at £9.50 on both occasions, whilst the flat white cost £2.80, the espresso cost £2.10, the piccolo cost £2.50, and the quiche – which is otherwise priced at £3.50, amounted to £6.50 with the addition of the salad. (I can only assume that the beetroot was hand-reared by the Queen). Generally, breakfast items range from £3-£10, coffees range from £2-£3, and cakes and bakes range from £3-£4. Whilst the food and coffee at Grounded is of a high standard, I do feel that most of the prices have been unnecessarily pushed up. That said, relative to the other breakfast spots in the area, the quality of their English breakfast is certainly superior.

The staff members you will encounter here are both friendly and welcoming. Service can however, be a little slow and inactive. For example, after engulfing my lunch, I noticed a couple that had entered the cafe and taken seats at a recently vacated table, which was still cluttered with the leftovers of the previous occupants. Although one of the staff members at the counter had seen them, he failed to lift a finger until the gentleman approached him several minutes later and asked for the table to be cleared. Another gentleman, upon finishing his meal, troubled a staff member for a glass of water. After two requests and a considerable amount of time spent waiting, the poor fellow became so dehydrated that he gave up, got up, and left, presumably to collect the rainwater outside in a desperate bid to quench his thirst. Whilst the service, generally, is effective and courteous, this lack of attentiveness and proactivity is a significant void that needs to be improved upon.

The cafe is fairly large and open, with a high ceiling and a mix-and-match rustic decor. The space is surrounded by a mixture of bare-brick walls, green plasterboards and green and white tiles, which are adorned with a number of wall-mounted light fixtures. An assortment of cosy booths and stern wooden stools and tables can be found along the cafe’s depth, offering a variety of seating options for the leisurely-drinker, the weekend-bruncher, and the nomadic-worker. The wide, open layout and stiff furniture is more reminiscent of a rustic bar than a homely cafe, but as a whole, the set-up is an attractive and effective use of the space at hand. The cafe is a brisk ten minute or five minute walk from Whitechapel or Aldgate East stations respectively, and those wishing to drive should be weary, as parking spaces may be difficult to come by.

The halal Full-English breakfast can, at times, be a difficult beast to find, and the halal coffee shop is a fairly mythical beast altogether. Yet, at Grounded, these two beasts come together as one, in the form of a reasonably proficient independent cafe. In an area dominated by low-key cafes serving simple, low-key breakfasts, Grounded strives to elevate theirs to an artisan standard, and whilst they may not be quite there just yet, they certainly make a reasonable effort to do so. For those who seek a fulfilling Full-English breakfast and a half-decent cup of coffee to go with it, The Grounded Coffee Co may just be the “go-to-place”.