The smoke cleared. The empty pens dropped. The fire extinguishers were deployed upon the friction-induced fires that covered everyone’s papers, and medical teams scrambled to tend to our blistered hands. I stumbled out of the exam hall with espresso in my eyes, revision-adipose around my gut and the realisation that cutting season was around the corner. Naturally, this meant one thing – one last guilt-free weekend of food, and there was only one thing on my mind for my post-exam treat – “Burgers”.

Proper Burgers is yet another new addition to the gourmet burger scene, and popped up on my social media radar last week. Given the positive vibes it had been reflecting into the cybersphere, and the word “Proper” in their name – (a declaration of “Know what we’re doing? Damn right we know what we’re doing”), I decided it would be the victim for my last calorific, fat-filled meal.

Note:
-All the meat served here is halal and HMC-approved.
-Proper Burgers accepts cash only. A cashpoint is available at Nationwide, Lea Bridge Road.

As soon as I looked through the menu, the “Uncle Chuck Norris” caught my eye – mainly because it sounded as though I’d have to wrestle the burger and receive five black eyes in order to get a bite of it. (Yes, five. Nobody fights Chuck Norris and leaves with just two). Steak ordered the “Red Morris”, and we both ordered a portion of rosemary fries and a chocolate milkshake.

The Uncle Chuck Norris consisted of two 4oz beef patties, turkey bacon, “proper sauce”, caramelised onions and monterey jack cheese (which I had ordered as a replacement for mature cheddar). Although the patties were cooked to medium as opposed to my medium-rare order, they were moist, tender and well-seasoned, and worked well with the mix of sweet caramelised onions, the mildly spicy proper sauce, and the sticky monterey jack cheese, which all worked in unison to deliver a range of complementary flavours. I was however, expecting a slightly stronger punch from the monterey jack cheese. In fact, given the brutal name, I was expecting the burger as a whole to fracture my maxilla with a single bite. Meanwhile, the turkey bacon proved to be just as thick and tender as the patty, and though it was a little salty, this didn’t detract from the burger as a whole. The same could not be said of the low quality brioche bun however, which possessed a rather straw-like texture, and let down an otherwise enjoyable burger. 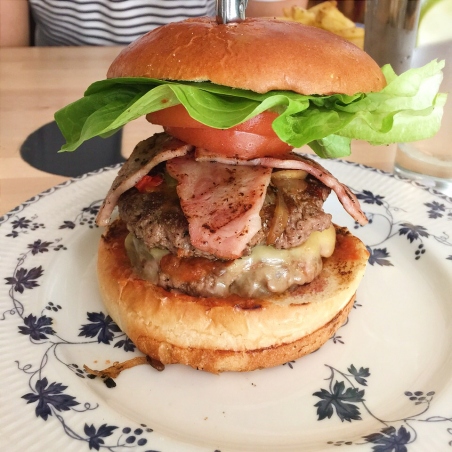 Steak’s “Red Morris” burger also consisted of two 4oz patties, but contained a sweet chilli sauce and red leicester cheese instead. Steak actually managed to finish most of it, which was a rather impressive achievement, considering that she has the stomach of a squirrel that’s undergone gastric band surgery. Whilst the patties in the Red Morris weren’t as moist (as she had despicably ordered them to be cooked medium-well), they remained soft. The red leicester cheese really brought the burger to life, by providing a powerful, mature kick with a subtle background sweetness, which combined with the subtle tang and sweetness of the sweet chilli sauce, creating a complex of layered flavours. 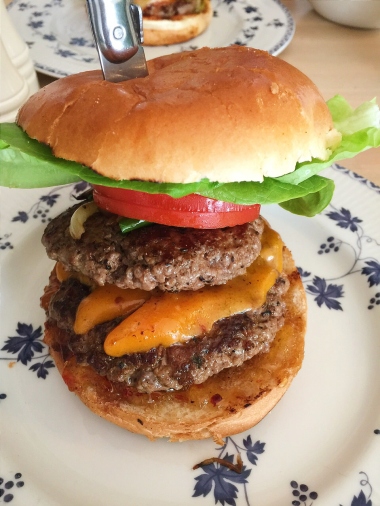 The rosemary fries came as promised – covered in rosemary and sea salt. With a crispy skin containing  fairly thick and good quality potato, they provided a sharp saltiness that was pleasant and in no way overbearing. 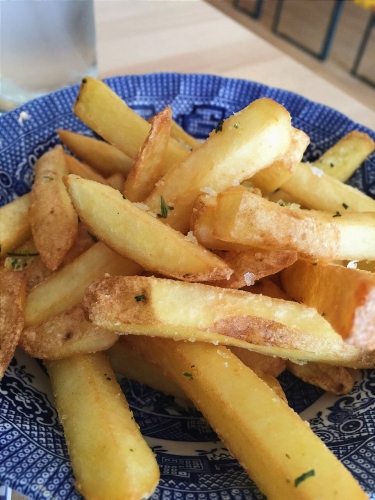 Our chocolate milkshake however, was a puzzle that remains to be solved. It arrived in a very large metal cup – which strangely, was half-full. There was an adequate amount of milkshake inside, but we were a little confused as to why they didn’t either use smaller cups or fill the large cup up to the top. The milkshake itself possessed a mild malt chocolate taste, with a subtle sweetness that was neither rich nor underwhelming. 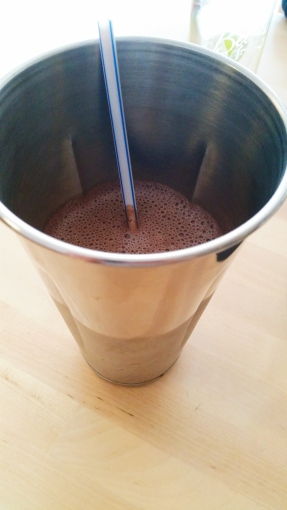 After a rather poor experience last Ramadan, I was determined to give Proper burgers a “proper second chance” to redeem itself. After settling in with Antman for a bromantic, lamp-lit lunch, I ordered one of Proper Burger’s new additions – the “Brisket 4”, consisting of a 4oz beef patty topped with cheese, slow-cooked beef brisket, and rather bizarrely, a handful of potato crisps that just didn’t seem to belong. The patty was cooked to medium, and possessed a rich and deep flavour that was pleasantly surprising. It had also retained its juices, and this moist texture meshed in wonderfully with the sticky and creamy cheese. Sadly however, this was let down by the brisket itself, which was rather dry and bland. 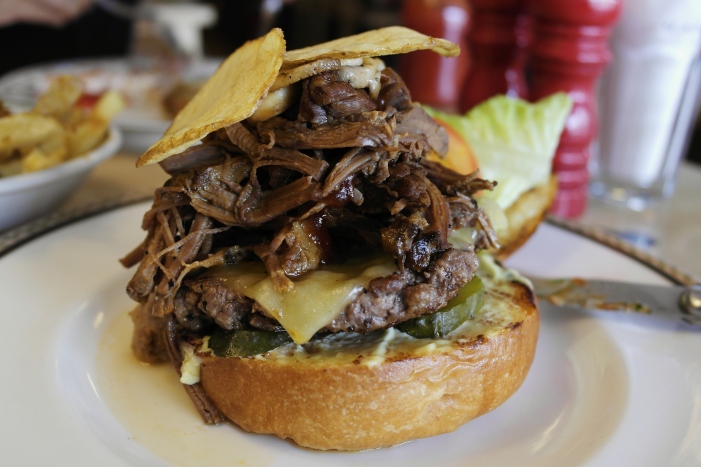 I had also convinced Antman to share a portion of “proper chips” with me, which consisted of skin-on fries covered in beef brisket, melted cheese, tomato sauce and horseradish cream. This was by far the best call of the day, as the resulting concoction proved to be soft, moist, and full of flavour. It also gave me flashbacks of the delightful brisket-poutine I had at Black Ox Bistro in Toronto, and that, for me, is reason enough to give this item a go. 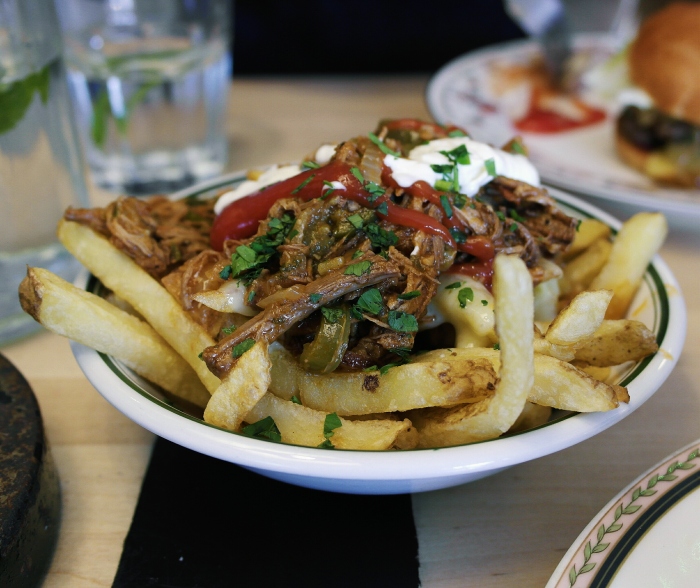 Deciding to finally explore Proper Burger’s list of desserts, I psychologically manipulated Antman into ordering a “Freakshake of the day”, which today, happened to be based in Nutella. Like any other freakshake, it resembled an explosion at the dessert bar, with a thick rim of nutella, a dense chocolate brownie thoroughly drowned in a pool of milkshake, and a manic helping of piped cream. The shake itself was light in both consistency and flavour, and this ensured that the shake was balanced amongst the other, richer components. Be warned however – you may need to call the fire brigade to hose you down and airlift you back home. 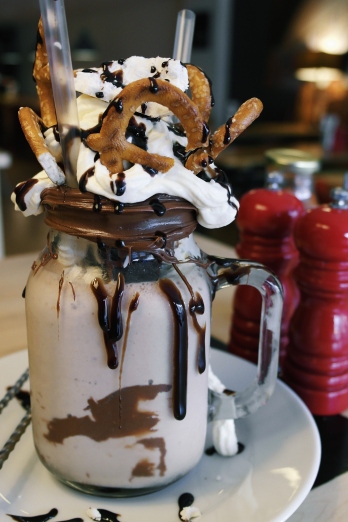 The Brisket 4 burger amounted to £12.95, whilst the proper chips cost £4.95, and the freakshake cost £7.95. Burgers range from £6-£16, starters from £2-£4, sides from £2-£3.50, desserts from £3-£8, and milkshakes and mocktails lie around the £4-£5 range. Despite the odd low-quality component, and a few costly signature items, (including the Brisket 4), the majority of the food at Proper Burgers is both affordable and satisfying.

Throughout each of my three visits to Proper Burgers, I have found the staff members to be friendly, welcoming, and attentive. However, service can, at times, be a little slow – even when the restaurant is as empty as my soul, and I do worry how this would fare during a busy dinner period. For the most part however, I would say that the staff at Proper Burgers run a tight ship.

Proper Burgers possesses a rather unique, modern look with a healthy dash of retro, in the form of a number of 90’s throwbacks. The restaurant is covered in a blend of white, green and pinewood, with an assortment of comfortable wooden chairs, tables, indoor benches, and a line of overhanging lamps. A type-writer sits proudly by the window, whilst a wall lined with compact cassettes greets you as you walk in – real cassettes mind you. Vintage formats of vintage songs, from Eric Clapton to Frank Sinatra and from the Phantom of the Opera to those guilty pleasures in life like “Thomas the Tank Engine and Friends”. (No need to deny it, we’re all friends here). Even the floral plates scream back to a 90’s family dinner, and provide a smack of pleasant nostalgia. It’s certainly quite an attractive venue, and far larger than one would expect.

The restaurant itself is a 10 minute bus trip from Leyton station, and requires a little bit of walking down Lea Bridge Road. Parking is relatively easy to find, both outside the restaurant and around the corner on nearby residential roads, though restrictions apply on some roads from 9am to 5pm, from Monday to Saturday.

Despite being the only people in the restaurant, (as a result of my remarkable ability to instantly repulse and repel humans from my immediate vicinity), it was by no means a tumbleweed affair. Proper burgers has a rather energetic vibe to it, with a number of mellow, retro tunes whispering in the background. The cassette tapes alone brought back fond memories of childhood. As I reminisced about listening to such cassettes, Steak reminisced about pulling the tape out and destroying them. (The vandalistic hoodlum). It’s certainly very easy to get comfortable at Proper Burgers, and you can enjoy your own private bubble as you stuff your face with beef, brioche and potato.

Like many gourmet burger establishments in London’s East-End, Proper Burgers excels at conceptualisation and ambition, but sadly, falls a little short in consistency and execution. That is not to say however, that they are not worth visiting. Their food is satisfying and affordable, and they are certainly one of the best eateries – (if not the best) to be found in the humble district of Leyton. However, their shortcomings hold them back from living up to their “Proper” moniker, and after three visits, I believe I have seen the best of what they can and will offer. They are, by all accounts, a great little burger spot in the heart of Leyton, but they’re not one to completely lose your head over.