If there’s one thing that irks me about the superficial world that we live in, it’s celebrity culture. The constant obsession some people have with the irrelevant details of the lives of irrelevant people, is something that I simply do not have the capacity, nor the will to understand. “Justin Bieber brushed his hair”. “Zayn Malik ate a samosa”. “Kim Kardashian blew her nose”. It’s all – quite frankly, a scourge of the modern world. There is however, one aspect of celebrity culture that everyone can relate to, and that is celebrity food. No, I’m not referring to what Kanye West had for breakfast – (although, if he opened a restaurant, we can all agree that he’d probably serve plain white bread for $500 a piece). Rather, I’m referring to popular food items that rise through the ranks of social media, reducing anyone who catches a glimpse of them into a screen-licking, dribble-dripping mess.

That, is exactly what Shackfuyu – part of the Bone Daddies group – has managed to achieve with its signature dessert. Upon the background of matcha’s ongoing surge in popularity, Shackfuyu’s enticing plates of “kinako french toast with matcha soft serve” quickly rose to critical acclaim, and in 2015, snatched the vote for “London’s best dessert”. Such a bold reputation naturally caught our attention – although, perhaps not enough of it, as Shackfuyu’s existence continued to slip my mind over the last year. Thankfully, I managed to fight off my bouts of Alzheimer’s last weekend, allowing Steak and I to venture forth and see whether Shackfuyu’s signature dessert deserves the fuss it has kicked up. Note: This review, in its current state, is of Shackfuyu’s dessert only. Shackfuyu’s chicken is however, halal-certified. Alcohol is served on the premises.

As promised, we were greeted by a triangular slab of french toast that could rival Sylvester Stallone’s skull in thickness, accompanied by a tall swirl of matcha ice cream, whose lucid shade of green seemed to represent a fusion between The Hulk and Mr. Whippy. The wonderfully chewy and crispy crust of the french toast put up a perfect amount of resistance, whilst the soft and buttery core was somewhat let down by a rather stodgy internal structure. Together with the coat of crumbly kinako flour, the french toast alone created a symphony of textures within the mouth. Ultimately however, this symphony struck a number of flat notes, principally in the form of a surprisingly bland body, and a significant lack of rich sweetness. Luckily, the matcha ice cream provided a little salvation, delivering a subtle, earthy aftertaste of matcha, alongside its smooth and creamy consistency.

Whilst the french toast had all the textures it needed to satisfy the senses, it had none of the flavour and richness to satisfy the soul. Personally, I would have liked for the french toast to have taken a more dominant presence on the tastebuds, with a rich, decadent character, and a strong, sweet flavour, which would have then been balanced out by an earthy dosage of matcha. Instead, the french toast relied upon the matcha ice cream to haul up its own dead weight – a task for which the flavour of the matcha ice cream was not strong nor direct enough. 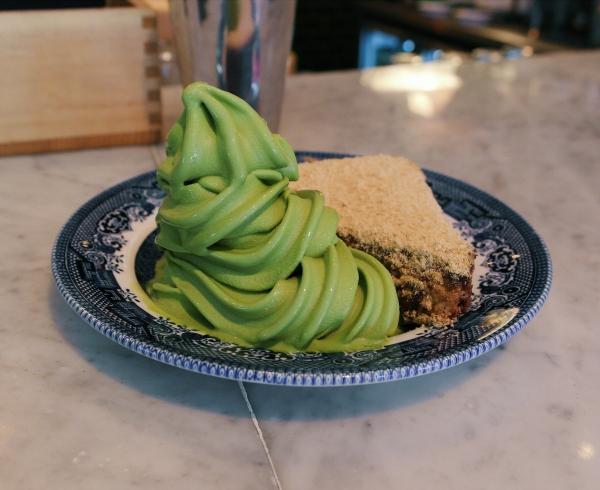 Staff members at Shackfuyu are delightfully courteous, and manage to meet the high demand for their insta-famous dessert with lightning efficiency. (There were three other groups waiting for kinako french toast, and a lot of visual stand-offs every time one was served. Luckily, no fatalities occured).

In rather fitting fashion, Shackfuyu’s “instagrammable” kinako french toast looks great, seems great, but in reality, is not really that great at all. Whilst Instagram’s filters may do well to soften my own ghoulish forehead and minimise the corneal scarring  incurred by gazing at my face, they don’t really do much to enhance the flat flavours within this celebrity french toast. Perhaps our mediocre experience was down to a one-off, sub-optimal batch, but if you haven’t yet tried Shackfuyu’s standalone dessert, I wouldn’t recommend you trip yourself up to do so. It was, by all means, a half-decent dessert – and certainly an aesthetic one, but by no means was it memorable, nor special enough to be considered “the best of 2015”.