I FEEL THE NEED. THE NEED TO FEED. If there was ever a Hollywood film from the 1980s that could be described as “cheesy”, Top Gun would not be it. Top Gun, would be described as “a giant blob of cheese, topped with grated cheese and drowned in a bath of molten cheese sauce”. A film that is as ridiculously corny as it is brilliantly entertaining, Top Gun is nothing short of a cult-classic, famous for high-octane fighter jet manoeuvres, Tom Cruise’s arrogant charm, and for being the only film in Hollywood history where every single character has a problem with perspiration. (Seriously, what’s with all the sweat?).

Riding on the jet stream of Top Gun’s success is “Top Gun Steak”, a Top-Gun-themed establishment that specialises in a wide range of steak, chicken, and vegetarian sandwiches. Armed with food that can only be described as both delicious and dirty, this aeronautical sandwich diner is likely to take your experience of North-American food to new heights – most likely by simply inducing a heart attack and sending you on your merry way to heaven. All the meat here is halal.

Disclaimer: In honour of the original “Top Gun” motion picture of 1986, this review will be full of cheesy aerial-references. Side effects may include nausea and violent projectile-vomiting. Please consult a Doctor before reading.

In rather suitable fashion, we visited Top Gun Steak as a prelude to our ascent of the CN Tower. Having already performed an aerial reconnaissance of Top Gun’s menu prior to my sortie, I knew exactly which sandwich would be the target of my meat-seeking missiles. The signature “Top Gun” sandwich consisted of grilled steak slices, chicken breast and a portobello mushroom, covered in cheese and topped with grilled onions, all held within two “grilled cheese sandwiches”, and served with a side of coleslaw.

Much to my surprise and dismay, the steak slices within were of a fairly average to low quality. Although they were well-seasoned, some pieces were tender, but most were fairly tough and chewy, and this could have spelt disaster for the sandwich were it not for the other components. The thick chicken breast, by contrast, was of a good quality, and possessed a tender, moist centre and a mildly seasoned outer surface. The bread that encased this partnership was toasted well and of a good quality, delivering a very wholesome feel, and a strong aroma, whilst the portobello mushroom – though soft with a contrasting rubbery texture – did not provide a particularly significant contribution to the sandwich as a whole. The true ace of this meaty dogfight was the top gun sauce, which was packed with strong flavours. Together with the strong cheese and the mildly savoury grilled onions, it brought all the contrasting and complementary components together as one cohesive unit, which resulted in an incredibly filling and guilt-packed American-style sandwich – albeit, one that was not free of flaws. 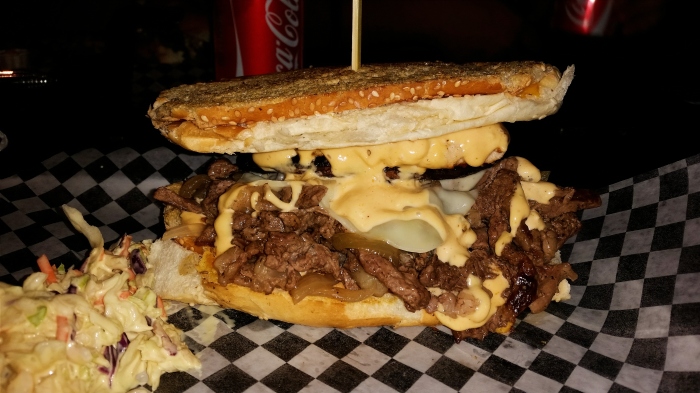 We also ordered a large poutine to share, and after taking evasive manoeuvres, I managed to get a quick photo before Yogi bear, Boo-Boo bear, and the rest of our motley flight crew repeatedly strafed the fragile box until nothing was left. Though the fries and cheese curds were plentiful and flavoursome, the gravy that smothered Top Gun’s poutine lacked strength and presence. As a result, it failed to bring the poutine together as well as it could have. That said, the poutine was still a fairly effective wingman – as were the regular fries, which were thin-cut, well-seasoned, and pleasantly rustic in nature. The vanilla milkshake I ordered to accompany my sandwich however, was weak, thin, and flat. The milkshake was also fairly small, and whilst Tom Cruise and much of the Asian population stand as living proof that (vertical) size doesn’t matter, a more generous portion (of a better milkshake) would have been welcomed. 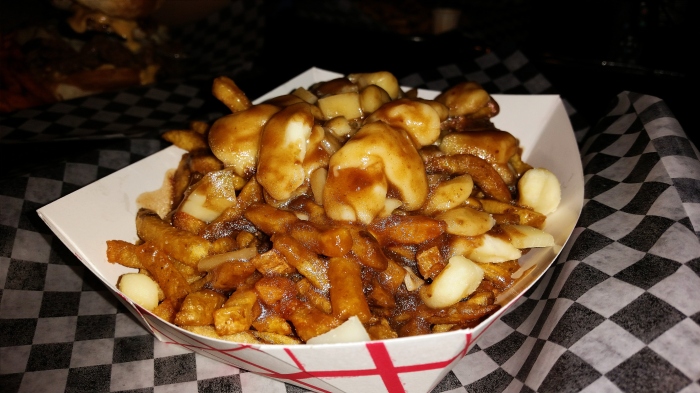 Service at Top Gun Steak is thoroughly Canadian. Our waitress was incredibly friendly, welcoming and patient. She stood by politely as the few indecisive individuals amongst us “umm”-ed and “ahh”-ed at the menu and blew a blood vessel in panic as the rest of us impatiently wondered what they had been doing for the last ten minutes. Both our food and bill arrived relatively quickly, and our waitress took the time to make conversation with us in between.

As I’ve mentioned already, many restaurants and diners in Toronto seem to go for a simple, functional decor, and the same goes for Top Gun Steak. Stiff wooden chairs and tables are the main occupants of this small, cosy, and dimly-lit sandwich diner, which otherwise sports nothing more than a simple coat of black-paint and a number of Top-Gun themed murals. The indoor surroundings certainly look a little worn and tired, but if you wish to take in the atmosphere of the surrounding area instead, dining al-fresco is also an option. Impressively, there is also a small prayer room located in the basement – ideal if you wish to seek forgiveness for the double-chins you are about to obtain.

Top Gun Steak can be found in close proximity to the hipster-esque Kensington market on Augusta avenue, where both “The Burgernator”, and Top Gun Steak’s brand new sister-establishment – “Top Gun Burgers”, also reside. Indeed, if you want to kill three birds with one stone, you could take part in a rather literal “diner-crawl” from one restaurant to the next, though hiring a small crane might be an easier option. Vacant parking spaces are difficult to come by on this stretch of Augusta Avenue, but free parking for a “limited-stay” is available on nearby residential roads. 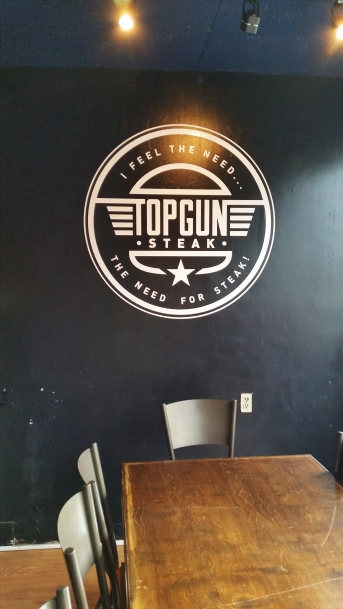 If you take a moment to overlook the fairly cramped conditions and simple surroundings, you’ll find a profoundly warm and friendly casual environment should you choose to dine in.

Top Gun is by no means a perfect movie, and Top Gun Steak is by no means a perfect sandwich stop. No doubt, there is much room for improvement in terms of quality. But, much like the vain and egotistical “Maverick” – the protagonist of the film that inspired them, there is a simple charm that accompanies their flaws. Whilst Top Gun Steak fails to soar above expectations, their cheap and cheerful culinary exploits still manage to achieve their main objective – to fulfil the need. And so, should you ever find yourself in downtown Toronto with the need to feed, radio in to Top Gun Steak and request a fly-by. If they tell you that the pattern is full, pay no attention – and ride into the danger zone.