Whenever I eat out, the very last dish I am interested in is one that is based on chicken. Chicken is my staple food at home – be it grilled, roasted, pan-fried, stir-fried, or in a curry. (Note how I started off with all the other options to give an illusion of diversity. Yeah I’m not fooling anyone – it’s mostly as a curry). Thus, chicken is often at the bottom of my list of desires when looking through a menu, or considering a place to eat. Whilst others hurl themselves into a hysterical frenzy at the mention of Nando’s and the like, my appetite does not stir – not even with my NHS discount.

On occasion however, that feeling changes, and that’s exactly what happened when my Insta-rader picked up images of a halal rotisserie chicken that was bigger than Steak’s head. (Though to be fair, a lot of things are bigger than Steak’s head. The list includes the iPhone 6+, green apples and small ping pong balls). Clockjack in Piccadilly circus is a very simple chicken-based restaurant that is armed with a very straightforward menu, and as such, offers a very humble and simple dining experience. Of this menu, the main rotisserie chicken is halal and cooked separately, whilst the wings are not halal (as they are cooked with alcohol). Please do clarify before ordering in case anything changes. Alcohol is served.

Like a spoilt child, I wanted the same huge chicken that I had spotted on Instagram’s metaphorical “shop window”, and I wanted it “now”. The whole rotisserie chicken we ordered was of a high quality and very impressively presented – having been seated upright on the tray. As far as chickens go, I could tell this one was the sensible one that always listened to the teacher and worked in silence. I initially opted to carve the chicken myself, but alas, the knife that was at my disposal was blunter than a sponge. I probably could have done more damage with the tip of my oversized nose.

After asking for another knife, the waiter must have declared me incompetent, as he took the entire chicken away to be carved by the chef (which was probably in the best interests of my own safety too). What returned were large pieces of thick and extremely moist chicken, which were incredibly well-cooked – so much so, that the chicken simply fell off the bone. The soft skin of the chicken was filled with flavour, and the chicken as a whole was well-seasoned, possessing a pleasantly mild flavour of herbs, and a wonderfully clean feel. 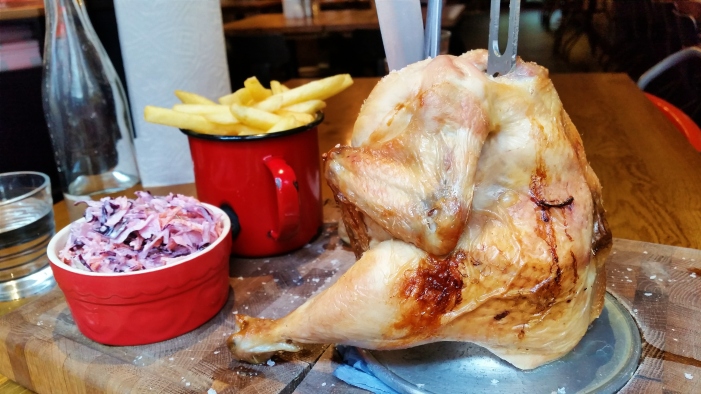 To accompany our chicken, we selected a portion of chips and a portion of “clockjack coleslaw”. The chips, unfortunately, were of a rather average quality, and most likely out of a packet. Nonetheless, despite the thin consistency and the thin potato within, the crispy skin and pleasant salty touch “did the job”, and worked well with the chicken. Clockjack’s signature coleslaw consisted of red cabbage, lettuce and fennel seeds in a lemon and mayonnaise sauce. The result of this combination was a strong mellow flavour, delivered alongside the crunchy textures of the main components.

For dessert, Steak and I ordered a vanilla cheesecake to share. Overall, it was rather on the small side of life, and possessed a fairly unexciting cheese layer that lacked any intrinsic depth of flavour. The contrasting, crumbly biscuit layer on the other hand, possessed much more, delivering a strong sweetness and a strong essence of caramel and malt to the palate. The accompanying raspberry coulis complemented the cheesecake well, but again, was a little too subtle in its delivery. It could have been a little sharper in nature to match the sharpness of the accompanying strawberry pieces and compensate for the fairly bland cream cheese layer. 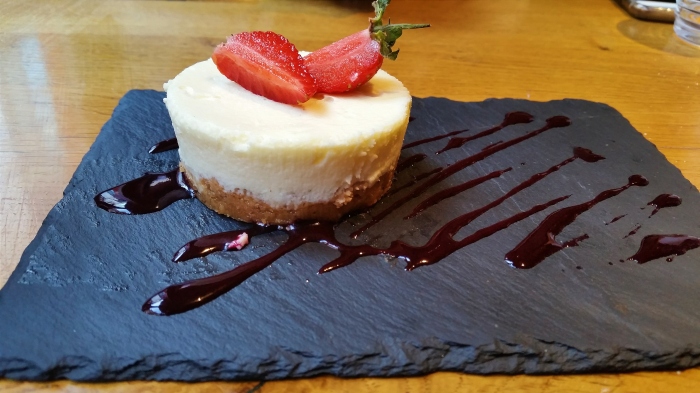 With mediocre fries and a mediocre dessert, you may be wondering why I have given Clockjack a 4/5 for food. Well, whilst the fries and the desserts seem to be fairly lacklustre, the main star of the show – the rotisserie chicken, is very good indeed. As far as “English” chicken goes, Clockjack goes a long way towards achieving an optimal cook and most importantly – an optimal amount of flavour and seasoning. Quite often, English roast chickens are seasoned with air, water, Instagram filters and imagination, (no offence intended), and Clockjack certainly jacks it up a notch when it comes to flavour.

Our whole rotisserie chicken cost £20, whilst the clockjack fries and clockjack coleslaw cost £3.50 and £3.25 respectively, and the vanilla cheesecake cost £4.95. All in all, a bill of £30.25. Half a chicken costs £11, a quarter chicken costs £6, whilst other mains range from £8-£9, and sides and desserts from £3-£5. Whilst the rotisserie chicken is of a high quality and very enjoyable, we do feel it is a little pricey – though of course, location must be considered. Given that the restaurant is situated a step away from Piccadilly Circus, prices are fairly in line with what you would expect. Whilst Clockjack might not give you the biggest bang for your buck, it’s still unlikely to leave a significant dent or void in either your wallet or your stomach.

Clockjack’s staff are extremely welcoming and helpful. After enquiring as to what exactly was halal on the menu, we received about three confirmations in quick succession from two different waiters and the manager. It seemed as though the staff were just as concerned about us eating halal food as we were, and such accommodation deserves credit. Service is also speedy, efficient and relatively organised. The only headless chicken you should encounter at Clockjack – is the one on your plate. (I’m referring to the rotisserie chicken. Do NOT put a disorganised waiter/waitress on your plate).

As I have already mentioned, Clockjack is a fairly simple restaurant, and as such, has a fairly simple but attractive diner-style decor, with simple wooden tables, chairs and booths. My favourite feature is probably their rather simple-looking mascot who occupies some of the walls. Whilst his thin, boxy shape may not be as attractive or as flamboyant as the more bulked out mascot of Nando’s, his boisterous personality and clucks of wisdom more than compensates. The restaurant is a quick five minute walk from Piccadilly Circus station. 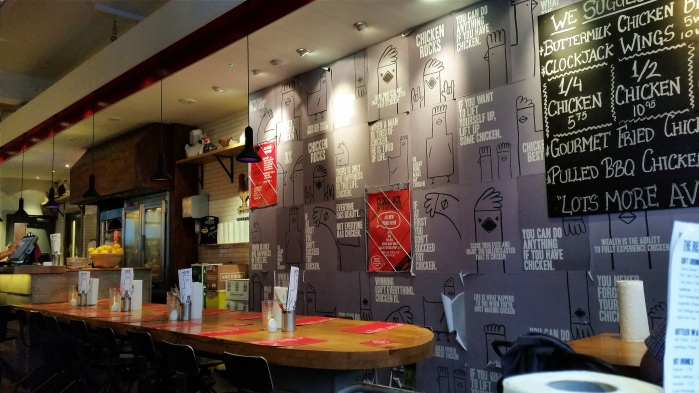 The atmosphere at Clockjack is quiet, reserved and like the life of a chicken, ever so slightly dull. That said, ambience isn’t a particularly high priority when it comes to casual eateries, and the dull atmosphere here doesn’t necessarily mean you’ll have a dull experience.

Whilst the traditional English roast chicken is often a bland butt of jokes, Clockjack manages to inject some much needed life and flavour back into them. With high quality chicken that is remarkably well-cooked, Clockjack is well worth “chicken out” (sorry) if you’re in the mood for a simple meal that delivers a simple satisfaction. “For the love of chicken”, give it a go.