Post-morning-gym, pre-evening-paediatric-clinic. I had added a cover-page and 75 words to my dissertation and for some reason I thought I deserved a break and a high calorie meal. Gourmet Hut popped onto my radar when they opened up a good few months ago, and despite the close proximity to the university and the dental hospital, I had not yet paid them a visit till last week. Nonetheless, that actually worked out in my favour. The initial opening reviews by other blogs were greatly mixed and mediocre, and since then, they seem to have improved rather substantially. All the meat here is halal.

Of-course, I followed my standard operating protocol for a burger diner – order the biggest and most expensive signature burger I see. In this case, it was “The Gourmet Hut Special”.

The gourmet hut special consisted of two beef patties, diced lamb, gherkins, “the gourmet hut sauce” and cheese. I ordered the patties to be done medium-rare, and they arrived closer to medium, though they still retained a nice tinge of pink throughout. The patties were pretty thick, of a fairly good quality, and fairly tender, though some of the moisture had unfortunately been cooked out of the meat. Individually, the beef did not have an overwhelming degree of flavour, and was just a pinch too salty, whilst the diced lamb was well-cooked with very mild tandoori flavours. The brioche bun lacked density, but as a result, was rather soft and light, which was pleasant.

Despite the fact that the individual components of the burger had a number of minor flaws, the burger as a whole was brought together by the cheese and the sauce. I’m not sure what the “TGH” sauce contains, but I personally found it to deliver some barbecue elements to the beef, which combined with the strong flavour of the cheese and the bursts of spicy zest from the jalapeños, and as a result, the burger as a whole was actually rather pleasant. In essence, it was a fairly average burger which could have met a fate of mediocrity, but instead, it’s destiny was altered by a good amount of well-flavoured sauce. I have no idea when I became so philosophical about burgers either. Socrat-eats-too-much is what I am.

The homemade fries were double-fried, (*whispers* what did they do wrong the first time?), and were of a very good quality and well-seasoned. They were thick and smooth inside with a firm crispy outer skin with a lovely rustic quality, owing to the double-fry. Very nice and very hard for me to pick a fight with them. Mainly because they’re chips and starting a fight with a bowl of chips is a little bit absurd.

The Gourmet Hut revamped their menu on the 31st of August 2015, and it just so happened to coincide with a booking for Jaw’s birthday the next day. It might seem like a suspicious coincidence, but I promise that is all that it was. My order this time round included a “Smokin’ Joe” with an extra beef patty, along with an oreo milkshake, whilst Steak opted for a “Lil Cheesy”, and we both ordered a portion of muddy fries to share.

The oreo milkshake was the first to arrive, and I approached the straw with apprehension – given the mild disaster that my last Gourmet-Hut-milkshake-experience was. To my pleasant surprise, it was nothing short of utterly fantastic. The milkshake had an extremely thick consistency, with a very strong flavour and a very rich sweetness. The layer of cream at the top was dusted with a rubble of oreo, and topped with an oreo too, providing a great blend of contrasting textures. A long way up from the ice cube fiasco of my first visit.

Next came a whoppingly generous portion of muddy fries, which could probably be standalone meal for a miniature-sized person like Steak. The fries were of a high homemade quality, and extremely thick and soft, splitting with ease as soon as a fork or a knife came into close proximity. The cheese and beef mince that smothered the fries provided a pleasant amount of soggy moisture to them, as well a very mild set of complementary flavours. 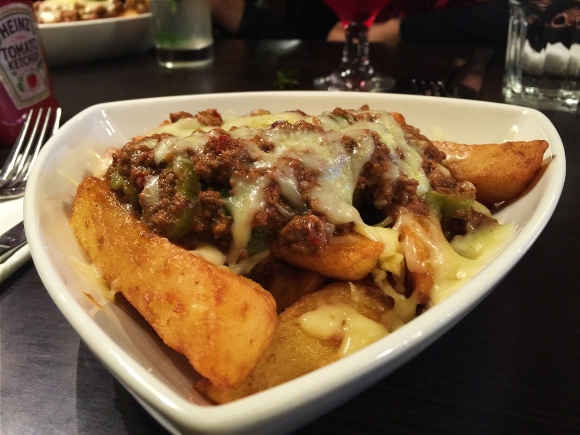 The patties within the Smokin’ Joe were of a good quality, but unfortunately, cooked to medium-well as opposed to the medium-rare I had ordered (and despite the waiter’s assurances that all the burgers are cooked to medium-rare by default). This resulted in a rather dry set of patties, which was a great shame. Nonetheless, the patties possessed a smokey essence, and were still quite flavoursome. The American cheese piled inbetween provided a very strong flavour and quite a salty punch, melting right onto the surface of the patties. Meanwhile, the turkey bacon possessed a soft texture and was also quite salty, and I felt as though a more crispy and caramelised texture would really have finished the burger off brilliantly. The Gourmet Hut’s barbecue sauce provided a pleasantly strong flavour and together with the well-caramelised caramelised onions, somewhat salvaged the lack of moisture in the dry patties, whilst the brioche buns that held this monstrous burger together were of a good quality, with a soft, yet firm and crispy texture. Overall, whilst individual components within the burger had a number of shortcomings, it all came together fairly well, and was certainly satisfying. I also grabbed a bite of Steak’s “Lil Cheesy”, a 4oz beef burger probably designed for those with the appetite of a small infant. The combination of cheeses complemented the miniature patty well, delivering a very creamy set of flavours to the palate, but again, the patty was a fairly dehydrated affair.

The Gourmet Hut are gradually stepping up to the plate, and whilst the the sides/starters and the milkshakes are now stepping into a 4/5 food score territory, the burgers – the main stars of the show – are still ever so slightly lagging behind. A little more care is certainly needed with the patties. Nonetheless, you’re more or less guaranteed a pleasant meal at the Gourmet Hut, and the food score is being updated from a 3 to a 3.5.

The Smokin’ Joe with an extra beef patty.

Prices are still quite high on the new menu, and it’s disappointing to see that a few of the prices have been bumped up a little. The gourmet hut special is now  £13.40 for example. That said, the quality of the food, particularly the sides, is high, and the quality of the milkshakes and other drinks has increased exponentially. Most of the prices are still the same, with starters around £4-£6, burgers ranging from £5-£13 (without sides), and sides from £3-£4, milkshakes and drinks around £4, and additional patties costing £3.95. The portions are also very hearty and generous, and smaller, cheaper food options are now available for those with a small appetite. For these reasons, the value for money score is being updated from a 2.5 to a 3/5.

Service is still very friendly and warm. I was particularly impressed that they were willing to take on a booking for 20 people, given that the restaurant itself only seats about 30-40. They were incredibly patient given the large, slightly boisterous size of our group, and for that they deserve credit.

Gourmet hut has a fresh baby-face, in the sense that everything still looks new and in good shape. It’s quite a small venue, (no more than 30-40 seats), with a dark oak decor, composed mainly of wooden chairs and tables, with some maroon-coloured leather diner seats with false pound coins sewn into them. A few of them were missing, proving that in Whitechapel, even plastic money will get stolen. Don’t leave a monopoly board out in the open. The restaurant is no more than a 10 minute walk from Whitechapel station, straight down Cavell Street. Parking is available and littered around but it might be difficult to find a free space in close proximity.

There’s a nice relaxing atmosphere here, mainly owing to the nasheeds playing in the background. It was empty when we visited, which meant that it was easy for us to dine in privacy. Given how small the diner is, I’m not sure how it would be if it were busy and rammed full of people, especially since the seats are quite close together. But hey, this is London – you should be used to having your personal space invaded by strangers. Just don’t sneeze on anyone’s burger.

The Gourmet Hut is certainly starting to go places, but, with such an explosion of competition in the halal gourmet burger market, they really need to eliminate the major and minor flaws now that they are more or less well-established. Central and West London diners continue to rule in supremacy, and it’s about time the East End brought up some stiff competition. That said, the Gourmet Hut does a very decent job, and is well worth a visit.